Venezuela Constituent Assembly Thanks Russia, China for Statements on Sanctions 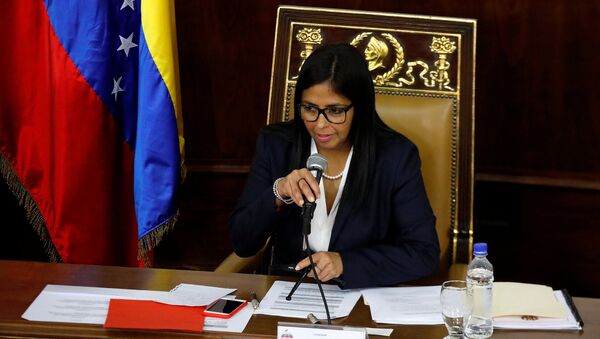 CARACAS (Sputnik) — Venezuela's Constituent Assembly President Delcy Rodriguez on Monday expressed her gratitude to the Russian and Chinese governments for their statements criticizing US sanctions against Caracas.

Earlier in the day, Russian Foreign Ministry's spokeswoman Maria Zakharova said that recent US sanctions against Venezuela's financial and oil sectors would deepen economic problems in the country. Similarly, Chinese Foreign Ministry's spokeswoman Hua Chunying said that the US restrictive measures would aggravate instability in Venezuela even further.

"We thank them [China and Russia] for their statements as they are based on respect of the international law," Rodriguez said.

US Sanctions Aim to Further Destabilize Venezuela - Russian Foreign Ministry
On August 25, US President Donald Trump signed an executive order imposing new financial sanctions against the Venezuelan government. The White House said the measures were "carefully calibrated" to put financial pressure on the government of Venezuelan President Nicolas Maduro. The United States previously threatened to sanction anyone involved with the Constituent Assembly, which was elected on July 30.

The Constituent Assembly is a legislative body, which has the power to amend Venezuela's constitution. The election of the assembly took place amid mass, deadly protests across the country. Venezuelan opposition, as well as the European Union and the United States, have refused to recognize the body's legitimacy.