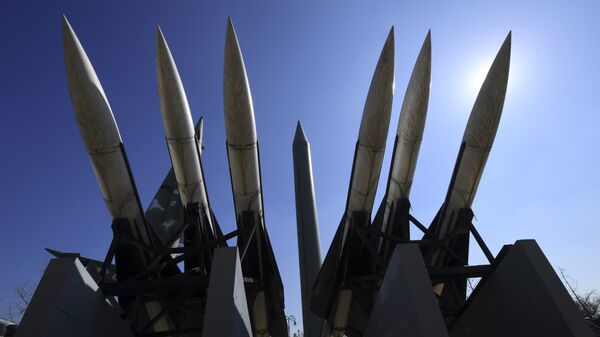 United States Pacific Command (USPACOM) has updated their report on Saturday’s trio of missile tests from North Korea. While they initially suggested that the test was a total failure, they amended their statement to say instead that only one missile failed, while the other two missiles actually flew successfully.

Pyongyang initiated the test in the early hours of August 26. "Initial assessment indicates three short-range ballistic missile launches," read the first USPACOM statement, mere minutes after the test. "The first and third missiles at 11:49 a.m. and 12:19 p.m. failed in flight. The second missile launch at 12:07 p.m. appears to have blown up almost immediately."

However, a few hours later, USPACOM corrected their statement. Instead of the first and third missiles failing in flight, they wrote, the projectiles flew "approximately 250 kilometers [155 miles] in a northeastern direction." They eventually landed in the Sea of Japan.

This was the first Democratic People's Republic of Korea (DPRK) missile test in August, after numerous commentators speculated that Pyongyang, Seoul, and Washington were closer to sitting down and seeking a diplomatic solution to the ongoing crisis than they had been for months. Earlier in August, US Secretary of State Rex Tillerson called the North Korean reaction to a new round of United Nations sanctions demonstrative of "some level of restraint," while US President Donald Trump said that North Korean President Kim Jong-un "is starting to respect us."

While Trump has yet to comment on Saturday's missile test, Tillerson strongly condemned Pyongyang. "The firing of any ballistic missile is a violation of UN Security Council resolutions," Tillerson told Fox News Sunday. "We do view it as a provocative act, a provocative act against the United States and our allies."

The interviewers asked if he and Trump had been too quick to declare a win in the Korean Peninsula. Tillerson replied that he didn't "know that we are wrong… I think it's going to take some time to tell. Clearly [Pyongyang] are still messaging us as well that they are not prepared to completely back away from their position."

However, the latest launch does not necessarily exclude the continued possibility of peace talks. "Having said that, we are going to continue our peaceful pressure campaign as I have described it: working with allies, working with China as well, to see if we can bring the regime in Pyongyang to the negotiating table, begin a dialogue on a different future for the Korean Peninsula and for North Korea," Tillerson said.

Preceding Ulchi-Freedom Guardian, Kim implied that he would conduct additional missile tests if the annual large-scale military exercise, meant to train allied militaries for the defense of South Korea against a DPRK invasion, went ahead. The exercises began last week.

But while military exercises and missile launches have become the norm on the Korean Peninsula, the latest round has proven especially worrying to those holding their breath for a peaceful resolution. Following Saturday's test, South Korean President Moon Jae-in (who has fervidly pushed for a diplomatic, non-violent end to the current crisis) ordered his military leaders to prepare an offensive strategy to invade the DPRK if he feels necessary.

"I want you to strongly push for reform of the military structure to meet the requirements of modern warfare so that it can quickly switch to an offensive posture in case North Korea stages a provocation that crosses the line or attacks the capital region," Moon said on Monday, according to Yonhap.