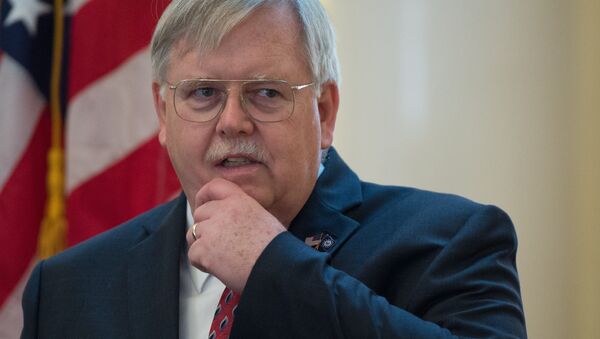 The outgoing US envoy to Russia, John Tefft, said he believes that sanctions against Russia are a "blunt instrument," adding, that "nobody wanted war" in the previous US administration that had first imposed restrictions on Moscow.

MOSCOW (Sputnik) — US Ambassador to Russia John Tefft, who will soon be replaced by his successor Jon Huntsman, acknowledged on Monday that the US' anti-Russia sanctions are a "blunt instrument," but at the same time stated that they are effective.

"I think the answer is somewhere in between. Sanctions are a blunt instrument. […] I think they have been effective," he told the Ekho Moskvy (Echo of Moscow) radio station, answering the question about how he evaluates the effectiveness of the sanctions.

Still, Tefft noted that the United States needed to respond to the alleged "violation of international law" in connection with events in Crimea and Ukraine, and the only alternative to sanctions was "war."

"The choice that was presented to the [former US President Barack] Obama administration was 'Do you want war with Russia?' Nobody wanted war with Russia," Tefft said.

New Anti-Russian Sanctions Reveal Congress Rivalry With US State Dept
In 2014, relations between Russia and the West deteriorated over Moscow's alleged involvement in the Ukraine's internal crisis and Crimea's reunification with Russia following a referendum. The United States and the European Union imposed several rounds of sanctions on Russia's energy, banking, defense and other sectors, as well as on a number of Russian officials.

US President Donald Trump signed a bill in August, that had been overwhelmingly approved by the US Congress, tightening sanctions against Russia, North Korea and Iran. The law also prevents the US president from removing the sanctions on Russia without congressional approval.