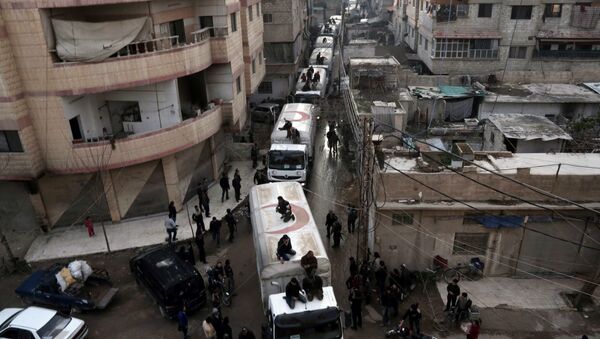 UN Spokesman’s Office reports that joint humanitarian convoy has reached the city of Ar Rastan in Homs and the besieged neighborhood of Barzeh in Damascus.

UNITED NATIONS (Sputnik) — A joint convoy of the United Nations, Red Cross and the Syrian Arab Red Crescent has delivered much needed aid to tens of thousands of people in Homs and a besieged Damascus neighborhood, Office of the Spokesman of the UN Secretary-General said on Monday.

"Yesterday, a joint convoy, comprising the UN, the Red Cross and the Syrian Arab Red Crescent (SARC), delivered aid for more than 107,000 people in the hard-to-reach city of Ar Rastan in Homs," the office stated. "On 26 August, a joint UN- SARC convoy delivered urgently-needed aid to 20,000 people in the besieged neighbo

The office also reiterated its concern for the safety of up to 25,000 civilians caught in the crossfire in the city of Raqqa, which is overrun by the Islamic State terror group (outlawed in Russia).

Around 10,000 people have been displaced from the city in the first half of August, according to the United Nations.