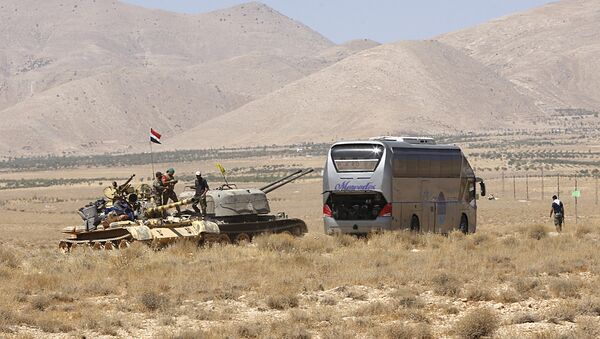 A source close to Hezbollah told Sputnik that a convoy of buses carrying Daesh militants from and their families heads to Syria from Lebanon as part of a withdrawal deal.

BEIRUT (Sputnik) — A convoy of buses carrying Daesh militants from and their families has begun heading to Syria from Lebanon as part of a withdrawal agreement, a source close to Lebanon’s Shia movement Hezbollah told Sputnik on Monday.

"The Red Cross vehicles with 25 injured Daesh militants headed to the meeting point behind the border crossing Sheikh Ali — Rumiyat in the mountainous region of West Qalamoun. The buses with the militants and their families are following them," the source said.

On Sunday, Syrian army reportedly agreed on the deal reached between Hezbollah and Daesh concerning the withdrawal of militants from the Western Qalamoun region. That same day, a ceasefire agreed upon by the Lebanese army and Daesh militants via mediators came into force.