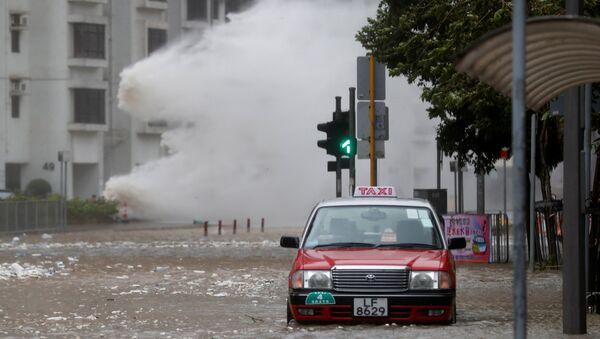 BEIJING (Sputnik) — Earlier in the day, a tropical cyclone alert was issued by the authorities in the southern autonomous regions of Macau and Hong Kong over the approaching storm.

Maximum wind speeds in the region have reached 33 meters per second (42 feet per second).

A number of southern Chinese regions including Macau and Hong Kong were hit by Hato on Wednesday, prompting the authorities to issue the highest storm alert level in years. The storm claimed the lives of 17 people.

The highest number of storm-related deaths, 9 people, occurred in Macau. The local authorities have involved the People's Liberation Army in coping with the aftermath of the storm for the first time in history.

Earlier in the day, the 8th cyclone alert level out of a maximum of 10 was issued by the authorities in the Chinese southern autonomous regions of Macau and Hong Kong over the nearing storm.

"The operations are quite severely affected," the airport spokesman said, as quoted by South China Morning Post.

At least 300 flights had been delayed or canceled at the airport. At least 20 planes were stuck on the runway, while another 30 were stuck at the terminal, according to pilots cited in the publication.