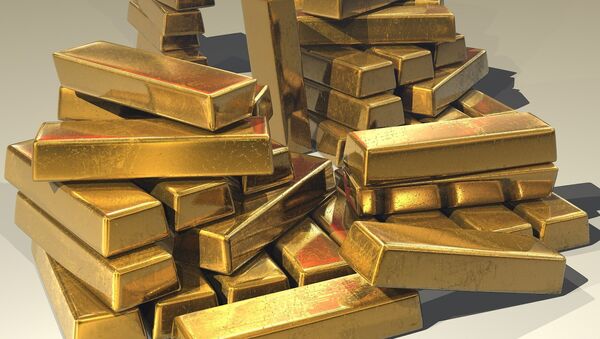 Gold Prices Showing Signs of Economic Downturn as Trump Enthusiasm Wanes
About 20 minutes ahead of Yellen's speech at the central bankers' meeting in Jackson Hole on Friday, some two million ounces of gold changed hands. The increased market volatility kept mounting during and after Yellen's speech, where she expressed her disagreement with President Donald Trump's economic policy agenda.

Gold had been steadily gaining in price this year despite, or thanks to, the political standoff in Washington and the Trump administration's lack of progress on reform. Market volatility had been at its lowest since 2005, but this massive sale of gold pushed stock futures higher.

"Between now and the end of the year, the story is going to be the Fed. The Fed was pretty hawkish coming into the year. Now it feels like they are backing away from September," Bob Haberkorn of RJO futures said, adding that the market is "bipolar" at this point.

Indeed, Yellen's speech  left the impression that the Fed will abstain from an interest rate hike in September — always a good sign for stock market speculators. Tighter monetary policies support the demand for haven assets, yet, how would the mysterious traders know that Yellen would send a dovish signal, 20 minutes before she spoke?

Dollar in the Crosshairs Amid Contradictory Remarks From Trump, Yellen
One of the reasons somebody wanted to get rid of such large volumes of gold might be a report from the Commodity Futures Trading Commission (CFTC) released on Friday. The report showed that the US dollar is poised to weaken — potentially pushing the gold prices up in the near-term — with speculator net-short bets against the greenback having risen to $9.4 billion in the past week, compared to $8.84 billion the week before.

Yet gold failed to break through the  threshold of $1,290-1,300/oz. that same week because of other major world  currencies' strengths against gold. A speculative dollar selloff might have helped gold extend its rally above $1,300/oz., meaning the one-minute selloff was aimed at containing gold prices below their resistance mark.

"Momentum has been against the dollar this whole summer and with volume low and not too much happening before today's Jackson Hole meeting that momentum is going to continue with nothing to stop the dollar from falling," John Doyle of Washington-based Tempus Inc. said.

This means dollar-denominated gold price could still surpass the $1,300/oz. threshold, but the heightened market volatility stemming from the one-minute selloff on Friday will effectively prevent such a development.

Gold futures for December delivery settled at $1,297.90/oz. on Friday after only briefly surpassing the $1,300/oz. mark during the day after the Dallas Fed President said the central bank should start decreasing its balance sheet "soon."

"Kaplan was dovish and sent it higher," Robin Bhar of Societe Generale AG said. "I don't know if anyone then got wind of what Yellen was going to say, but it then dropped like a stone. And then, when she didn't mention monetary policy, things started to stabilize again."

Since early March 2017, the US dollar and gold have been tightly interconnected, with the dollar weakening and gold gradually gaining in value. However, at this time, the predictions for further weakening of the dollar contradict  gold price dynamics, as bullion traders have become excessively optimistic of the gold price in the near-term.

At this point, a strong move up or down in gold prices is not expected, the rising volatility opens up various possibilities of major one-time sales and purchases. Precious metals are poised to gain in value at least until the Trump administration implements the first elements of its fiscal policies, whilst the dollar's weakening is unlikely to snap until December, which is when the markets expect the Fed to hike interest rates.