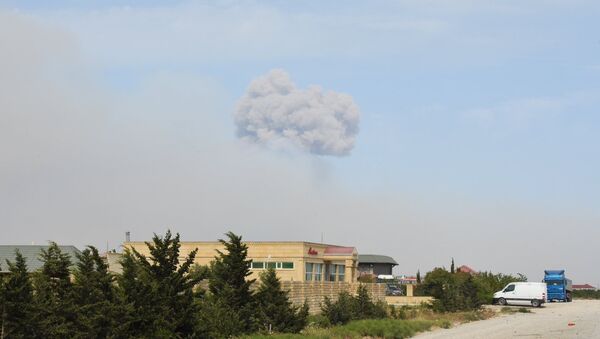 Six people were injured as a result of an army weapons warehouse fire and explosion in Azerbaijan, the Azerbaijani Health Ministry told Sputnik on Sunday.

BAKU (Sputnik) — A large explosion followed a fire at an arms storage located in an army base in northeast Azerbaijan earlier in the day. The Health Ministry previously confirmed that there were casualties but said that ambulances could not approach the site due to recurring explosions.

"There are six injured people at the moment. They have been hospitalized with shrapnel wounds," the ministry said.

People from the towns close to the military base in Azerbaijan's Khizi District, where the explosion took place, are being evacuated, the Azerbaijani Defense Ministry said.

"The population of the areas close to the military base, where an explosion took place in an arms storage, is being evacuated. In particular, people have been evacuated from the towns of Gilazi, Sitalchay and other settlements," the statement read.

In Gilazi several shells hit houses causing fire. As a result of the explosion, the motorway linking Azerbaijani capital Baku with the Russian border was shut. Several people have been reportedly wounded.

Blast Hits Central Kiev on Ukraine Independence Day
Local media reported that the motorway linking Azerbaijani capital Baku with the Russian border was shut after the incident. The blast reportedly took place in the Siazan District in northeastern Azerbaijan.

The oxu.az published pictures of rising pillars of smoke near a motorway, with the latter lined with cars.