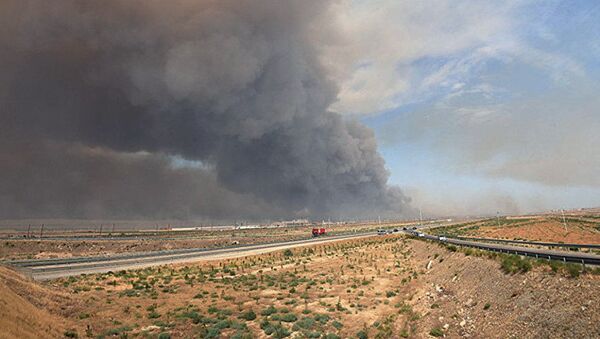 Azerbaijan's Emergencies and Defense Ministries on Sunday confirmed to Sputnik that a major blast rocked an arms storage facility at an army base in the country.

BAKU (Sputnik) — The Emergencies Ministry added that firefighting units were en route to the site of the incident.

"A fire took place at an arms storage on Sunday. Explosions were seen at the site as a result… There is no information about any people killed or injured," the Defense Ministry said, without specifying the location of the blast.

Work is underway to determine the cause of the incident, the ministry added.

The Azerbaijani Healthcare Ministry has received information about casualties after an army storage blast, the ministry's chief medical officer in charge of ambulance services said.

Azerbaijan's Emergencies and Defense Ministries confirmed to Sputnik that a major blast had rocked an arms storage at a military base earlier on Sunday.

"Ten ambulance vehicles are currently directed to the blast area, however they cannot arrive at the incident cite due to recurring explosions. We have received information about casualties. Additional ambulance cars will be involved if needed," Miralam Jalalov said, as quoted by the Azerbaijani APA news agency.

Blast Hits Central Kiev on Ukraine Independence Day
Local media reported that the highway linking the Azerbaijani capital Baku with the Russian border was closed after the incident. The blast reportedly took place in the Siazan District in northeastern Azerbaijan.

The site oxu.az published pictures of rising pillars of smoke near the highway, the latter being lined with cars.