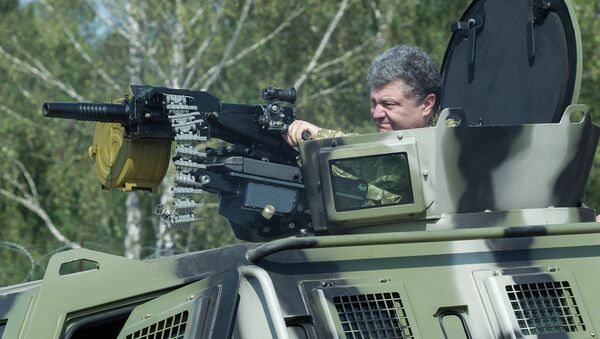 Experts believe that US lethal weapons deliveries to Ukraine may make it possible for Kiev to engage in aggressive operations in the East of Ukraine.

WASHINGTON (Sputnik) — New US arms to Ukraine may have a psychological impact and provide Kiev with a greenlight to launch massive attacks to retake the Donbass and Lugansk regions, analysts told Sputnik.

US Would Be Mad to Supply 'Unreliable' Ukraine With Lethal Weapons
University of Rhode Island Professor of Peace Studies Nicolai Petro said such weapons supplies would not significantly affect the military balance of forces in Eastern Ukraine, but they could encourage the Kiev regime into dangerously irresponsible actions that could put global security at risk.

"The main impact of such weapons, if provided, would be psychological. The War Party in Ukraine would see it as a ‘green light’ for launching what they refer to as the ‘Croatian Solution’--an all-out attack aimed at reconquering Donbass in a matter of days," Petro explained.

However, any such aggressive move by the regime of Poroshenko would certainly alarm the secessionist groups fighting to retain their freedom from Kiev and tempt them into taking preemptive measures, Petro predicted.

"In anticipation of this [aggressive move by the Poroshenko government], rebel military formations might launch their own preemptive strikes," he said.

The escalating conflict would then force Russian regular forces to get involved to maintain regional security too, Petro warned.

"The Russian military would probably also be mobilized, to intervene if necessary. The entire situation could then very quickly spin out of control," he said.

The kinds of weapons being discussed were largely irrelevant already because many NATO member states had already been supplying Ukraine with them for over the past two years, Petro pointed out.

"As the Ukrainian ambassador to the US Valery Chalyi pointed out, Ukraine has been receiving lethal weaponry since 2015 from nearly a dozen Western countries," he said.

However, Petro also advised that Mattis and Trump might not supply additional weapons to Ukraine.

"The interesting question is why these threats have not been implemented. I suspect it is because there is a consensus view in Washington that it would only escalate the conflict," he said.

McCain: Mattis' Ukraine Visit Opportunity to Provide Lethal Assistance
The most direct outcome, and possible motive, for Washington to send more weapons to Kiev would be to ensure the final breakdown of the Minsk Peace Accords, which Russia is trying to implement and to which the United States has also pledged support, Petro remarked.

"The demise of the Minsk Accords would then be tied visibly to this event, which is still not likely to decisively affect the outcome," he said.

US IRRESPONSIBLE TO ARM UKRAINE

Whatever the real motive or alleged justification, any move by the US government to supply Ukraine with more lethal weapons would be irresponsible and unwise, George Mason University School of Law Professor Francis Buckley advised.

Sending such weapons to the Kiev regime would be "politically stupid of course," he told Sputnik.

US war hawks among Republicans and Democrats were so extreme in their hostility to Russia and eagerness to stir up tensions that even supplying more weapons to Ukraine would not appease or reduce their hostility to Trump, Buckley observed.

However, Mattis’ comments in Kiev might also have been motivated by a desire to reassure the governments of the tiny Baltic states of Lithuania, Latvia and Estonia all of which wanted a stronger NATO presence in their territories, Buckley added.

"One possibility: pressure from the Baltics," he said.

However, the United States as a global superpower would be ill-advised to allow tiny client states to unduly influence, let alone dictate to it policies with vast national security implications and consequences, Buckley pointed out.

Russian officials responded to Mattis' remarks by urging restraint, saying that the delivery of US weapons to Ukraine was "inappropriate" in light of a new ceasefire which took effect in the war-torn Donbass region on Friday