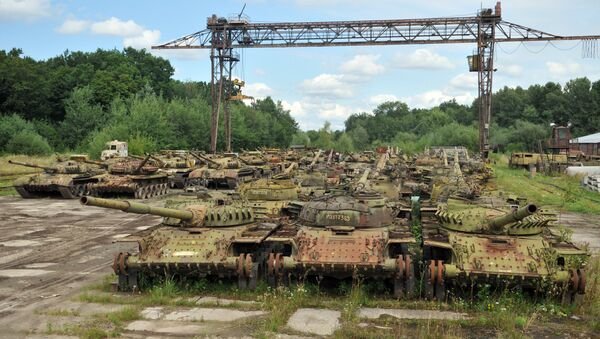 © Sputnik / Stringer
/
Go to the photo bank
Subscribe
Military observer Gennady Nechaev reveals the bitter truth about the sorry state of Ukraine's tank forces, presenting details about how the former tank-manufacturing superpower has been turned into little more than a storehouse for obsolete equipment.

Last week, Ukrainian President Petro Poroshenko boasted on his Facebook page about the production of a new, modernized version of the Soviet-designed T-72 main battle tank.

"The Ukrainian Army is getting stronger every day," the president wrote, his Facebook post designed to provoke a surge of patriotic pride among the population. However, according to military observer and Vzglyad contributor Gennady Nechaev, a closer examination of the true state of Ukraine's tank park reveals that there is little for Ukrainians to be proud of in today's circumstances when it comes to the country's tank-building legacy.

For starters, the analyst explained that the fact that Ukraine is starting to employ a new version of the T-72, the Soviet-era tank manufactured in Russia-based factories, is an indication that the T-64, the country's main battle tank produced by Kharkov's legendary Malyshev Factory, faces problems with modernization and maintenance. Otherwise, why else would Kiev spend its scant resources on the modernization of an inferior platform?

Russian MoD Decides to Buy 'Terminator' Combat Vehicles – Here's Why
At the same time, Nechaev noted that while today's Ukraine has essentially lost its former ability to produce new, modern tanks in large quantities, the nation's industry does retain significant capabilities in the fields of repair and modernization.

"With the collapse of the Soviet Union, the Ukrainian state received a very diverse park of combat vehicles, most of it quite modern. The T-54/55/62 line, the conceptual heirs to the T-34, were poorly represented in the USSR's western military districts [including in Ukraine], and used mainly in training units…Uralmash's T-72 was considered by the Soviet military as a 'mobilization' tank, meant for second-tier divisions. Accordingly, the territories of Ukraine and Crimea were equipped with only four divisions featuring the latter tank; instead, the foundation of Soviet tank units in Soviet Ukraine was made up by T-64s." 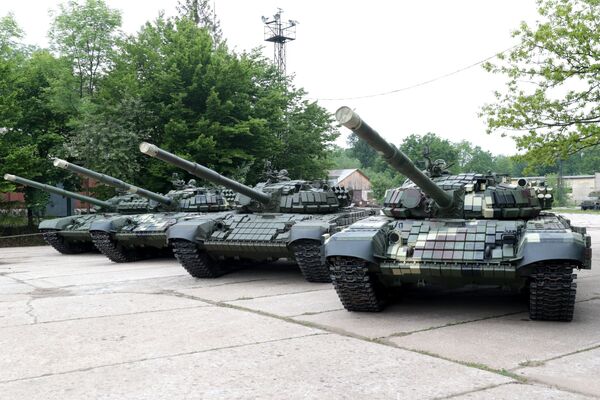 T 72 and T-64 tanks are on display in the Lviv Armor Repair Plant, file photo.
© Sputnik / Stringer
/
Go to the photo bank

In the early 1990s, the newly formed Ukrainian armed forces, which inherited a total of over 4,000 MBTs, only adopted T-64s into service; T-72s were sent to the reserves, or used as training units. The country also inherited between 200 and 500 cutting-edge T-80s, another Kharkov design. Over half of these were sold off to other countries in the 1990s. 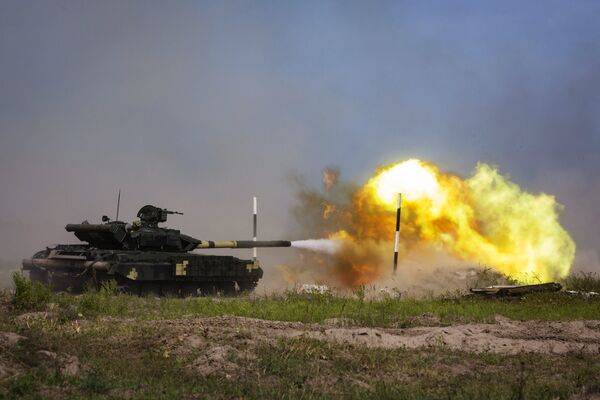 Unstoppable: Russia's New APC Can Swim 60 Kilometers, Fire in Amphibious Mode
"The Ukrainian military, together with local businessmen, quickly realized what was what, and the T-72 became a popular export commodity," the analyst added. "Between 1992 and 2014, Ukraine sold 863 T-72s of various modifications to various, mostly third world countries. The last delivery of 14 tanks to Nigeria took place after the outbreak of hostilities in the Donbass."

Furthermore, among its armory of T-64s, 227 were from the first generation – the T-64R, which required modernization and upgrades to prepare it for modern combat conditions. However, only two tanks of this series ended up receiving the necessary upgrades.

"In addition," Nechaev noted, "within the balance of the Ministry of Defense are about 500 T-64s in storage, most of them in the so-called 'fourth tier' of equipment, i.e. complete junk." 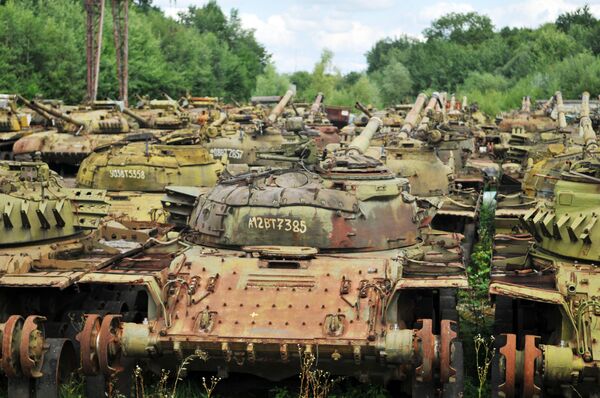 Ukrainian Troops Kill Over 30 People in Donbass Amid 'Harvest Ceasefire'
Furthermore, during the hot phase of the civil war in eastern Ukraine in 2014 and early 2015, over 50 T-64s were captured by the militia, with another 200 destroyed or damaged beyond repair.

This, according to the observer, means that at the moment, there are about 500-550 combat-ready T-64s remaining in Ukraine's Armed Forces. "Accounting for the cannibalization for spare parts of stored vehicles and in the absence of serious losses, it is possible to maintain this park in combat-ready condition for a relatively long time. However, replenishment is out of the question."

"And here Ukraine's generals also remembered another component of the not yet totally squandered Soviet legacy: the gas turbine T-80. In terms of components, these tanks have a lot in common with the T-64…Restored T-80s are earmarked for the highly mobile assault forces. Each of the seven brigades of Ukraine's Airborne Troops is assigned a company of 10 such tanks. To date, about 60 T-80s have been restored and transferred to the troops by the Kharkov tank repair plant."

Between 20-40 more modernized T-80s may be delivered to the Ukrainian army in the coming months and years. One caveat to the tank, however, is its use of a gas turbine engine, a finicky design requiring support from weapons maintenance specialists which are becoming increasingly difficult to find in the country.

That leaves the remaining reserve of T-72s. Nechaev recalled that "miraculously, according to experts, these tanks, even the ones in storage, remain for the most part in tier two (i.e. suitable for factory repair)…The idea of army command is to equip tank companies and battalions of mechanized infantry which lack T-64s with these tanks."

"According to rough estimates, by the end of 2016, Ukraine has about 300 T-72s, mostly obsolete modifications. Only a small number of these vehicles took part in combat [in the Donbass]; two were captured by the militia. One, a T-72B1 (the most modern T-72 in the country's arsenal) was made out to be a Russian T-72B3 by Ukrainian media and presented as 'evidence of Russian intervention'" in the armed conflict in the country's east. 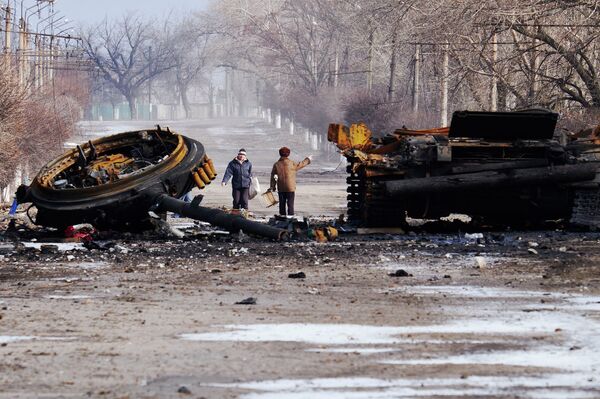 Residents of the Ukrainian town of Uglegorsk near a burned-out tank belonging to the Ukrainian army. file photo
© Fotobank.ru/Getty Images

Ultimately, Nechaev noted that "in conditions of a complete breakdown of relations with Russia in the field of military-technical cooperation, the squandering of the Soviet legacy and losses incurred during fighting, the Ukrainian Armed Forces have found themselves returning to the situation from which they have attempted to escape: they remain armed with the same three basic tank models. At the same time, unlike Russia, where money has been allocated in recent years for the modernization of the country's tank park…in Ukraine this program is stalled."

US Would Be Mad to Supply 'Unreliable' Ukraine With Lethal Weapons
The same applies even to the T-72AMT which President Poroshenko boasted about last week, the analyst noted, with the 'modernized tank' really a hopelessly obsolete budget design expected to provide "only a slight increase in combat effectiveness."

Nechaev noted that for the military's punitive operations in the Donbass, this may be enough. In any possible conflict with Russia, however, Ukraine's tank forces would be immediately and hopelessly outmatched.

In any case, "however the current conflict in Ukraine may end, the end result will be that the country's entire modern tank fleet is turned to junk. Everything possible is being done to squeeze the last remaining operational life out of the tanks. After that, the once mighty industrial power will find itself at the same level as an average country in Africa not only in terms of income, but also in terms of its military power," the analyst concluded.

000000
Popular comments
The plan probably is that they will have to buy US-american military equipment in exchange for selling all fertile land to U.S. corporations...