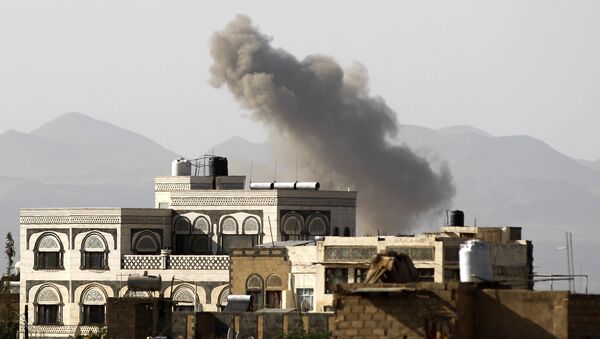 The Saudi-led coalition is investigating into airstrikes at civil constructions in Sanaa allegedly carried out by the coalition.

MOSCOW (Sputnik) — An inquiry has been launched into reported airstrikes at civilian targets the Yemeni capital, attributed to the Saudi-led coalition, the coalition's has announced.

"We will make public the results of the investigation into airstrikes on southern Sanaa as soon as it is completed," the statement said Friday.

Saudi Arabia-led Coalition Ready to Work With US on Sanaa's Air Strike Probe
The coalition has been blamed for striking a hotel in a Sanaa suburb, which killed 33 people and wounded 25. The UN High Commissioner's Human Rights Office has called for a probe into the accident, adding at least 42 civilians had died in coalition airstrikes over the past week.

The UN Human Rights Office estimates that at least 5,110 civilians have been killed and 8,719 others injured in Yemen since the start of the Saudi operation in March 2015.

Yemen has been engulfed in a violent conflict between the government headed by Abd Rabbuh Mansur Hadi and the Houthi movement, backed by troops loyal to former President Ali Abdullah Saleh. The government receives air and land support from the Saudis. The Houthis routinely respond with rocket attacks at the Saudi border.