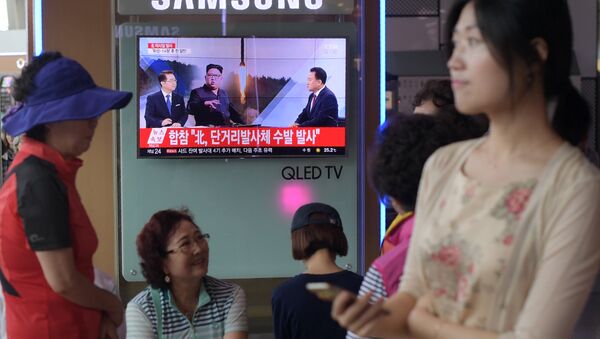 North Korea fired what is believed to be three short-range ballistic missiles off its eastern coast early on Saturday, the first such launch since it threatened to strike the US Pacific island of Guam.

MOSCOW (Sputnik) – The US and South Korean militaries said the salvo of projectiles posed no direct threat to their territories. The Pacific Command claimed the newest test had failed.

The launch comes as allied troops continue a joint military exercise, condenamed Ulchi Freedom Guardian (UFG). It began on Monday and will run until the end of August.

The North has reacted angrily to the exercise in past years, calling it a preparation for an invasion and threatening to sink US warships in the Sea of Japan.

A barrage of what the South Korean joint chiefs of staff described as "unidentified projectiles" blasted off from a site in the eastern Gangwon province at around 6:49 a.m local time (21:49GMT Friday).

The South Korean military reportedly said they had travelled over 155 miles before plunging into the Sea of Japan.

White House spokeswoman Sarah Sanders said US President Donald Trump had been briefed about the new ballistic missile launch by North Korea, and his administration was "monitoring the situation."

The press secretary of South Korean President Moon Jae-in said the national security council had met for an urgent meeting where they reviewed "the defense posture" of Korean troops and vowed to "proceed more thoroughly" with the UFG drills.

Japanese Prime Minister Shinzo Abe has ordered officials to "remain on high alert," according to spokesman Suga who was quoted by the national broadcaster NHK.

The Japanese government has agreed to continue monitoring the situation on the Korean peninsula in close cooperation with South Korea and the United States and warned of new provocations from the North.

Tensions between Washington and Pyongyang spiked after the North tested a second intercontinental ballistic missile last month. It claimed the new weapon had the US mainland within its reach, and threatened to strike near the Guam military base, prompting an angry exchange with Trump who said an attack on a US territory would be met with "fire and fury."