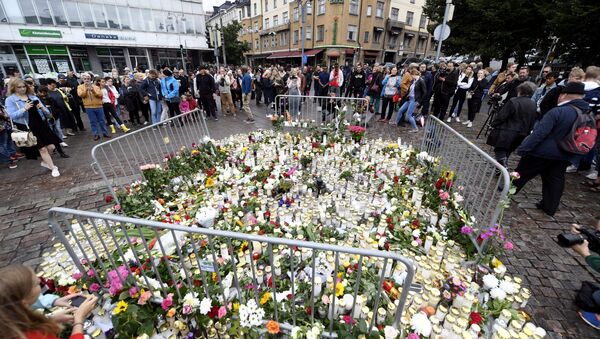 © REUTERS / Lehtikuva/Vesa Moilanen
Subscribe
International
India
Africa
Finnish police released the man, who was arrested on 23 Aug in relation to the Turku stabbings, according to official statement of the Finnish National Bureau of Investigation.

MOSCOW (Sputnik) — One of those detained following the deadly stabbing in the Finnish city of Turku has been released by police, the Finnish National Bureau of Investigation said Saturday.

Finnish Police Detain Two More People in Turku Stabbings Case
On August 18, two people were killed and eight others were injured in a knife attack in Turku's market square. The key suspect, who was shot by police while being detained, was identified as an 18-year-old Moroccan citizen. The suspect arrived in Turku last year and was trying to get asylum in Finland. Finnish National Police Commissioner Seppo Kolehmainen said he did not rule out that the incident in Turku was connected with international terrorism but could not confirm that version so far.

"[Police] have released the man, who was arrested on 23 Aug in relation to the #Turku stabbings. He is no longer suspected of any crime," the investigators wrote on Twitter.

Turku Stabbing Attack Suspect Wanted to Join Daesh - Reports
On Thursday, the country's police said that two individuals were apprehended on August 23 in relation to the Turku stabbing. One of them was subsequently released after questioning on Thursday with all his charges were lifted.

There are currently three suspects in custody over the attack. The key suspect admitted stabbing ten people, but denied murdering people as well as having terrorist motivations.