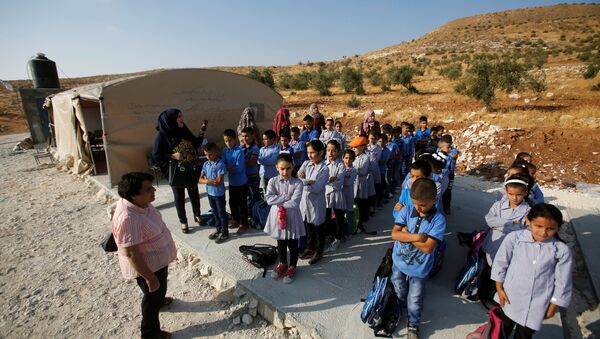 Earlier Israeli forces have confiscated five portable buildings that were donated by the EU to Palestinians in the West Bank region and were used by the latter as classrooms for children. Israeli authorities claimed that the confiscations were conducted because the Palestinians lacked a proper building permit.

EU High Representative for Foreign Affairs Federica Mogherini has declined to comment on the development.

The office of EU Representative and the EU Heads of Mission in Jerusalem and Ramallah issued a formal statement regarding the matter, expressing a “strong concern” about these confiscations and calling on Israel to halt this policy, but without mentioning the link between the confiscated buildings and EU humanitarian initiatives.

Egypt, Palestine, Jordan Call for Recommencing Israel-Palestine Talks
Meanwhile, Sputnik Deutschland citing Austrian newspaper Der Standard reports that in 2017 the EU spent 82 million euros on humanitarian aid projects for Palestinian refugees as part of the UN Relief and Works Agency for Palestine Refugees in the Near East program. The humanitarian aid was provided to some 700 schools and 140 hospitals.

Gerard Bapt, former MP of the French National Assembly, told Sputnik France that the EU spends considerable sums of money on humanitarian aid to Palestine and on various humanitarian projects run by NGOs that are supported by European authorities.

"I believe that these projects cost the EU at least several hundred million euros per year," Bapt said. 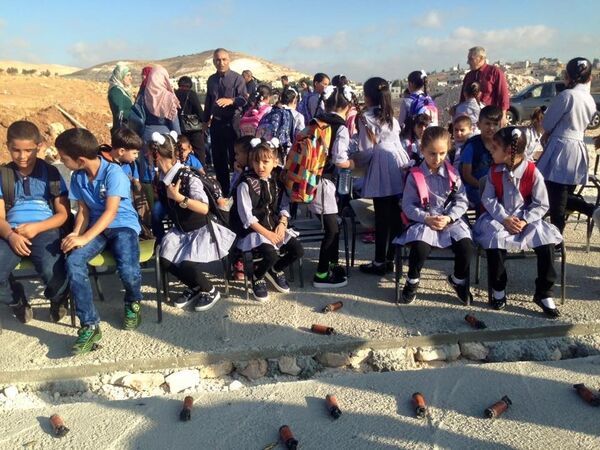 Palestinian students gather at the site of their demolished school
© Sputnik

He pointed out that occurrences like this confiscation “are quite regrettable because education is the best way to fight extremists, especially terrorists.”

Bapt also said that this situation needs to be thoroughly investigated in order to determine whether the Palestinians really didn’t have a proper building permit.

"However, considering that the buildings were constructed in an area under the Palestinian jurisdiction, or in an area considered a warzone, there were infractions committed under the Israeli law," Bapt said.

"All in all, it is unfortunate that the schools were demolished right on the eve of a new term. This move runs contrary to Israel’s interests," he added.

The former lawmaker pointed out that it remains unclear whether the EU would be able to get its point across to Israel, as Tel Aviv tends not to take notice of international pressure.

"We need some Israeli NGO to go to the Israeli courts. Israeli justice can be independent and impartial, and we have numerous opportunities to see the proof of that," Bapt concluded.

According to Palestinian officials, Israeli authorities confiscated five portable buildings in the Jab al Zeb district located to the east of Bethlehem in the West Bank region. Local residents said that Israeli forces arrived at night, without allowing the Palestinian side to protest their actions in court.