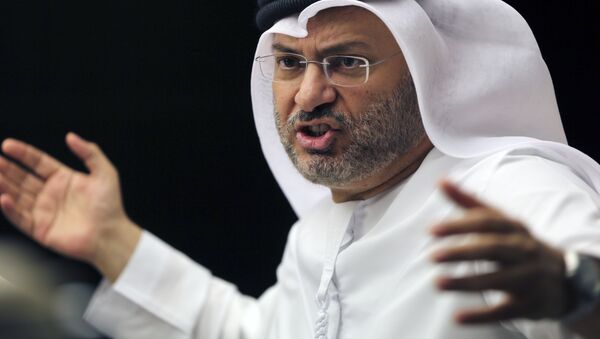 The United Arab Emirates' Foreign Minister Anwar Gargash on Friday slammed Doha's decision to return its ambassador to Iran in a move to boost Qatar's ties with Tehran.

MOSCOW (Sputnik) – Qatar withdrew its Iranian ambassador after Saudi Arabia had severed its ties with Iran over failing to protect its diplomatic missions in Tehran and Mashhad from attacks in early 2016. On Thursday, Doha announced the decision to return its ambassador, following a telephone conversation between the leaders of the two countries.

"[Qatar's] sovereign decision should not be shy or confused, but its arrogance and adolescent behavior makes it so. Its justification is not convincing," Gargash wrote on Twitter as quoted by The National news outlet.

Chad Shuts Down Qatar Embassy Over Alleged Destabilization Attempts
Qatar's decision to return its ambassador to Iran "embarrasses Doha and reveals its political tactics," Gargash added. The foreign minister also questioned the reasoning behind the decision to boost ties with Iran following several Arab states' request to abandon them.

Gargash also pointed out that Iran's main interest in the Gulf lay in Qatar’s gas fields.

In early June, Bahrain, Egypt, Saudi Arabia and the United Arab Emirates announced their breaking off of diplomatic relations with Qatar, accusing Doha of supporting terrorist organizations and destabilizing the situation in the Middle East. The Qatari Foreign Ministry rejected the accusations of Doha's interference in other countries' domestic affairs and expressed regret over the Saudi-led group's decision to cut off diplomatic ties.

On June 22, the countries blocking Qatar conveyed to Doha via mediators from Kuwait a list of 13 demands to restore relations. The list included, in particular, the closing of the Al Jazeera broadcasting network and the scaling down of Qatar's ties with Iran. Doha has rejected the demands as an infringement on Qatar’s sovereignty.