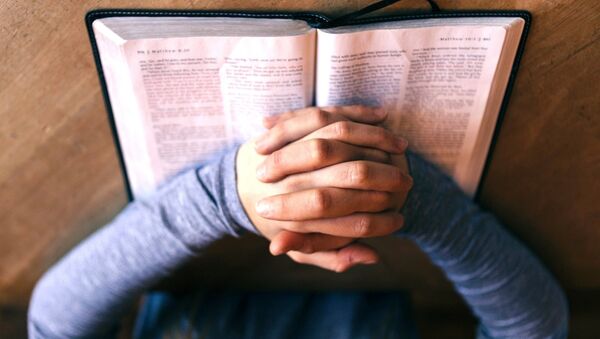 © Photo : Pixabay
Subscribe
International
India
Africa
If you want to take a look at a snapshot of what young Chinese people think about religion, just browse through the comments they made on the recent US International Religious Freedom Report. What you find might be startling.

The US International Religious Freedom report for 2016, released by the US State Department on August 15, criticized China's religious environment, saying that the Chinese government continues to "exercise control over religion and restrict the activities and personal freedom of religious adherents" when they were perceived to threaten State or Communist Party of China interests.

The report also sparked a backlash on Chinese social media. The majority of netizens voiced their disagreement with the report, but many of them seemed to reject its conclusions simply because they see religion in general as a terrible thing.

One netizen, who uses the handle "Ajiao Xiaomeinv" on Sina Weibo, commented, "We would be thankful if China has no religious freedom." The comment was given 373 upvotes.

Another netizen, apparently an Islamophobe, commented, "I can only hope that there is endless religious freedom in the US — let halal restaurants and Muslims be everywhere."

The netizens' remarks seem to show how antipathy to religion is on the rise in China, at least among some netizens. Experts say it also shows how little young people today know about religion, as the country, which has an atheist official ideology, lacks formal education on the subject.

The Chinese government is officially atheist. Members of the ruling Communist Party of China are not allowed to practice religion. Although some researchers say China is now experiencing a period of religious revival, the country is still one of the least religious countries in the world, according to 2015 research by Gallup, a US-based consulting company. According to their research, 61 percent of Chinese mainlanders say they are atheist, followed by those in Hong Kong (34 percent) and Japan (31 percent).

A 2014 Pew poll, which asked people from 40 countries if they see belief in God as essential to morality, saw only 14 percent of Chinese answer in the affirmative, the lowest among all the countries polled.

In the past years, the rising pan-halal tendency, in which some Muslims are demanding things be halal which cannot really be halal and a suspected trend of Islamic rituals penetrating into secular life, has fueled dislike of the religion.

The growing threat of religious extremism in the Xinjiang Uyghur Autonomous Region, which Chinese officials often warn against, has also boosted fear. This impression is boosted by the fact that some Uyghurs are joining global jihadist attacks. This January, for example, two Chinese Uyghur Muslims were arrested for a terrorist attack in a nightclub in Istanbul, Turkey.

While Christianity, in general, has a better reputation among most Chinese than Islam, many nationalists often associate it with "Western hostile influences" and are on guard against the religion's spread.

Last May, some netizens were enraged after finding out that a Chinese textbook used by schools in Beijing included a passage from the Bible's Book of Genesis.

A leftist netizen using the handle "Wang Xiaoshi" said that this is a dangerous inclusion. "These are examples of people with ulterior motives trying to poison the souls of our next generation, and impact their recognition of a unified country." He even mentioned China's education law, which stipulates that education should be separated from religion.

Another netizen commented at that time, "Mythology is mythology, and religion is religion. Brainwashing children with religion? That's horrible."

Many netizens echoed and shared their negative experience of being accosted by Christians who tried to convert them.

"If Chinese people have no understanding of Christianity, then they would probably find this harassment awful," a religious researcher, who asked for anonymity due to the sensitivity of the issue, told the Global Times.

Compared with Christianity and Islam, Buddhism and Taoism, being Asian religions, are not as sensitive in China's media and political contexts. But the two religions are often caught in scandals.

For example, Shi Yongxin, the abbot of the Shaolin Temple, the cradle of Shaolin kung fu, was accused in 2015 of engaging in sexual relations with several women and having illegitimate children. Although Shi denied the accusations and investigations by Chinese authorities also concluded they were untrue, the incident was detrimental to the temple's image.

"No matter whether the accusations are true or not, the scandal affected the reputation of the Shaolin Temple and shook the beliefs of some of Shi Yongxin's followers," Xia Xueluan, a sociology professor at Peking University, told the Global Times at the time.

The over-commercialization of some Chinese Buddhist temples, which attract large number of tourists, is also hurting the image of the religion. Many people think that as religious sites, temples, just like churches, should not charge an entry fee to people who come in order to worship.

Some local governments even rent temples to companies, who run them as businesses. A report by China News Magazine in 2012 said a private company paid 7.2 million yuan ($1.08 million) to contract a temple, and hired fake monks as salespeople who persuaded visitors to donate money in exchange for good luck.

Compared with Buddhism, Taoism, which has mostly rural followers, has a smaller presence in China's mainstream media.

A post by architect Xu Teng, who wrote about a Taoist temple in Yi county, North China's Hebei Province, went viral recently. The temple featured statues of a range of "modern" gods, all garishly made, including the "god of cars" and the "god of officials," and each god was "contracted" by a local who made money from people coming to worship these gods. It seemed as if people could create gods at will in Taoism to cater to people's needs.

"This is market economy, not religion," one netizen commented.

Wang Meixiu, a research fellow at the Institute of World Religion Studies of the Chinese Academy of Social Sciences, said some young people's aversion to religion is a complex issue due to historical and education reasons.

"I think it's a complex issue, fueled by the lack of explanation of religions in Chinese textbooks and irresponsible presentations on online media," she told the Global Times.

Chinese school textbooks make little mention of religion. In some senior-level political textbooks, religion is explained with Marxist theories and described as a tool that the ruling class uses to solidify their rule.

World
Role of Religion in 2016: From Spiritual Guidance to Political Affairs

The other unnamed researcher said the online backlash may not reflect China's reality. "More and more people are actually taking in faith in today's China. Young people today should respect other people's faith, rather than attacking something they have no understanding of," he told the Global Times.

A 2014 research paper by Yang Fenggang, director of the Center on Religion and Chinese Society at Purdue University in Indiana, estimated that the Christian community in China will grow to 160 million by 2025 and exceed 247 million by 2030.