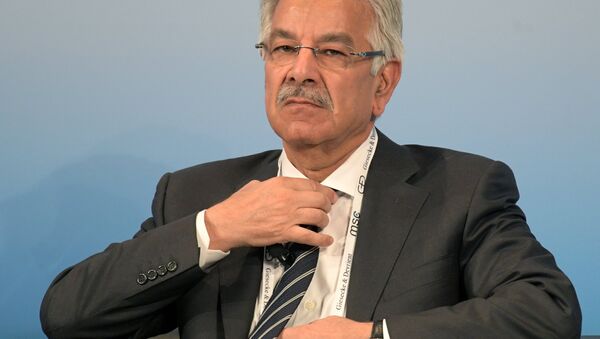 © Sputnik / Grigoriy Sisoev
/
Go to the mediabank
Subscribe
International
India
Africa
Pakistani Foreign Minister says his country will work together with Russia and China in the light of the new US strategy for Afghanistan.

MOSCOW (Sputnik) — Pakistan will reach out for Russia and China among other regional powers to work out a response to the new policy in the South Asia, proposed by US President Donald Trump, Pakistani Foreign Minister Khawaja Asif said Thursday.

On Monday night, Trump unveiled his new strategy for Afghanistan during a speech in which he called on Pakistan to do more to crack down on terrorist safe havens, warning that otherwise the United States would cut its aid to the country. On Wednesday, Politico news website reported, citing senior US administration officials, that the United States may impose sanctions on Pakistani officials with links to terrorist organizations.

"We will contact China, Russia [and other countries of the region] in the coming days in order to get a regional consensus and a solution," Asif told the Geo TV broadcaster.

World
New US Stance on Afghanistan: 'The War to Intensify, Taliban to Get Stronger'
The minister also noted that if necessary he would visit the United States to discuss the issue with the country's leadership.

"Pakistan would never want unrest in Afghanistan as it would also clash with the country’s own interest," Asif said, adding that Pakistan sought stability in region no only for itself, but for neighboring Turkmenistan and Uzbekistan.

Earlier in the day, the Pakistani Foreign Ministry said that the country's National Security Committee rejected the accusations brought against Islamabad in Trump Administration’s South Asia strategy, part of which accuses the country of harboring terrorists.

Afghanistan has been ravaged by the conflict with the Taliban, a major Islamic fundamentalist political movement in the 1990s, which held power over a large part of the country in 1996-2001 before being overthrown. The movement was then able to regroup and regain some of its prominence, waging war against the Afghan government.