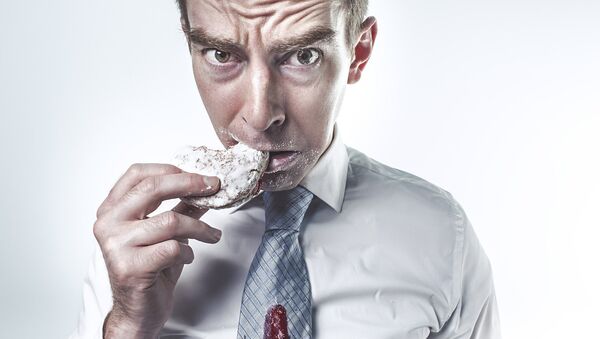 Given the eccentric nature of his culinary skills, it is perhaps a bold decision to ask anyone who has ever worked with world-renowned chef Heston Blumenthal to devise a special meal - far less to be served in the sky! Budget airline Monarch have decided to take up the challenge by recruiting the services of a leading food psychologist.

Monarch, a British low-cost airline, have turned to food psychologist Professor Charles Spence to create a food menu designed to settle the stomachs of flyers rather than leave them feeling bloated and groggy — and stressed.

The Oxford scholar insists his unique menu has mood-enhancing properties that will effectively ditch the all-too-common trials and tribulations that often go with airline travel these days.

We recently developed and trialled a VERY interesting snack concept to enhance your travel experience! Take a look: https://t.co/DfzOjuXnof pic.twitter.com/Wbg1B7ZsWw

​Clearly influenced by his time spent at Heston's Fat Duck Research Kitchen, the professor passed on his thoughts to be developed by top chef Jozef Youssef and his team.

Outlining his food box, Professor Spence admitted: "Traveling is a time when we're under pressure and rushed, so eating well is often an afterthought."

Sampling plane food to help with jet lag from Prof Charles Spence of @xmodal and trying to catch some cheerleaders now on @BBCOxford 😱🍽 pic.twitter.com/xFQaLwNNUR

​"I've loved working with Monarch to use food — which can be a powerful psychological and physiological tool — to create the first ever real 'happy' meal to get travelers in the holiday mood as quickly as possible," Professor Spence said.

It follows new research, which reveals over a third of Brits (33%) don't relax until at least day three of their holiday, and 72% find traveling to their holiday destination stressful.

​More than 2,000 British holidaymakers were quizzed as part of Monarch's Year of Nice campaign. The survey found that over a third (39%) of Brits cite the stresses of traveling as their biggest holiday mood killer — second only to bad weather (43%).

Now the Mood Food box aims to make the experience of traveling nicer from the moment customers get to the airport gate, as over half of Brits (52%) find the airport to be the most stressful part of their holiday, while good food (60%) is most likely to lift spirits when on annual leave.

Prior to take off, passengers will receive "immunity boosting" echinacea and liquorice ice cream, designed to reduce the symptoms of coughs and colds, after 39% of Brits said they get ill when traveling or going on holiday.

Find out the story behind our very special snacks designed to make your travel experience a lot better 😋 #YearOfNice pic.twitter.com/ogQ39o7Wqd

​According to the researchers, active ingredients in liquorice have well-established anit-inflammatory and cell protective abilities and as such, offer many therapeutic, immunity boosting benefits.

Ice cream was also voted the top holiday treat by 40% of Brits, with the vivid black liquorice color surprising and delighting passengers.

"The black color is certainly counter-intuitive — most passengers think of white or pale colors with the ice cream. This may also help to distract passengers from their chaotic journey whilst also surprising them and playing into childlike nostalgia," Professor Spence explained.

Lavender has been proven to enhance relaxation and sleep quality in all ages and the high polyphenol content of green tea means it's packed with antioxidants, adding a second boost of immunity to travelers.

It will be accompanied by a crunchy, seaweed biscuit, delivering sweet, yet salty, umami tastes.

"Reduced air pressure, dry cabin air, and engine noise all inhibit taste perception, but umami is the only one of the basic tastes that manages to cut through these barriers, which is why so many passengers order a tomato juice or Bloody Mary on board. Using umami tastes alongside our other flavour combinations will be comforting and satisfying for passengers," Professor Spence revealed.

Finally, travelers will indulge in a sweet caramelized nut bar coated in umami rich mushroom and tomato powder to re-energize and awaken the senses as they arrive at their destination.

​Artur Kurlowicz, food hygiene lecturer, at City of Glasgow College, admitted the airline could face an uphill struggle trying to convince passengers to opt for this style of food — especially high in the sky.

"As they say, the proof will be in the pudding in as much as getting people to ditch traditional airline meals such as chicken curries and full English breakfasts instead of a more healthy option," Mr. Kurlowicz Sputnik.

"The ingredients being suggested by the professor are well known for their relaxing qualities, so there is no real surprise there especially herbal tea. How it is presented and served could be interesting, however."