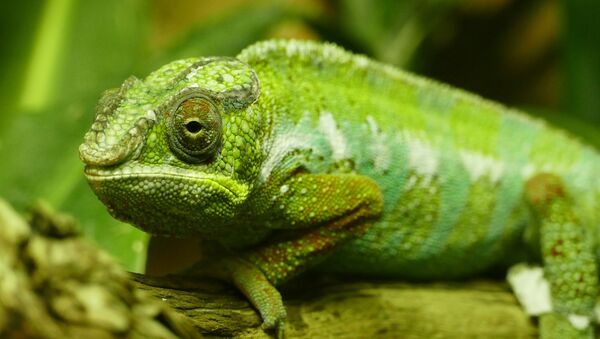 This adorable reptile gripping on toy weapons will make you feel safe and secure.

Emma Ward from Michigan, US, keeps a cute chameleon named Olive as a pet. The lizard will grab anything you put in her hand, and when Emma discovered this natural but peculiar "talent" in her pet, she decided to let her imagination run wild.

Everything looks very funny in Olive's tiny claws, so her owner thought it would be an interesting idea to hand her miniature weapons. Emma took several photos of the chameleon holding LEGO swords and Evangelion weapons and published them on her Twitter.

Chameleons are fun cause they'll grab anything you give them. pic.twitter.com/aTJ2Abjrs4

However, the reptile's owner did not expect these images would bring Olive worldwide fame. Emma's tweet has received a whopping 401,000 likes and was shared more than 170,000 times. Moreover, other users sent pictures of their pets holding different objects in response to her post.

Olive's photos also inspired some fan art and found their way to Imgur and Reddit's photoshop battles where they've got the meme treatment.

Well I got just a tiny bit carried away with this. pic.twitter.com/rXATGbOk9x

Your pet better watch out I've dealt with his kind pic.twitter.com/HylRKgByUc

"THEY MAY TAKE OUR FLIES!.. BUT THEY WILL NEVER TAKE, OUR FREEDOM!!" pic.twitter.com/HSIMOtcYf0