Russia, Turkey, Iran, and Syria need to team up in order to clear terrorists from Syria, Turkish political analyst Bora Bayraktar told Sputnik, adding that the US military buildup in the region, as well as the threat of the creation of independent Kurdish entities, allow for new regional alliances to blossom.

The US military buildup in the Middle East has pushed regional players and their allies to form new alliances in order to restore stability in the region, Turkish journalist and political analyst Bora Bayraktar says.

"The US presence [the Middle East] and strengthening of its positions [there] is triggering security concerns among the region's players, and do pushing them to create new alliances and consolidate efforts in the face of common danger," Bayraktar told Sputnik Turkey.

"The reasons behind it are the constant presence of the American military in the region, the increase in the number of US military bases, the threat of dismemberment of Syria and Iraq, the possibility of the creation of an independent Kurdish political entity," he said.

Specter of Syrian Kurdistan: How US' Covert Plan is Taking Shape
The political analyst drew attention to the fact although 14 years have passed since the US occupation of Iraq in 2003 the American military has yet to leave the territory of the sovereign state. While Washington's methods and means have undergone changes, its intention to beef up its presence in the region remains intact.

According to Bayraktar, right now the US is seeking ways to minimize its expenses, and apparently, therefore, Washington has decided to team up with Kurdish militias and political parties in the region.

"A series of events is now simultaneously taking place in the region: the operation to liberate [the Iraqi city] of Tel Afar, preparations for the [independence] referendum in Iraqi Kurdistan and [two separate] offensives against Raqqa and Deir ez-Zor," the political analyst said.

However, the independence referendum in Iraqi Kurdistan scheduled for September 25 could become the turning point.

Although Ankara maintained working relations with the leader of the Kurdistan Regional Government (KGR) in Iraq, Masoud Barzani, Bayraktar notes that this cooperation could come to a halt if the upcoming referendum upsets the fragile balance in the region. 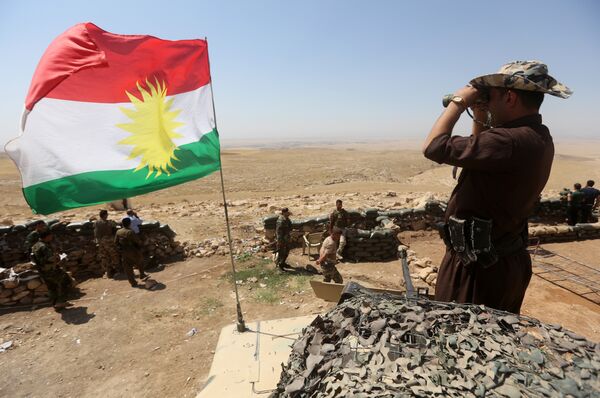 A flag of the autonomous Kurdistan region flies as Iraqi Kurdish Peshmerga fighters take position to monitor the area from their front line post in Bashiqa, a town 13 kilometres north-east of Mosul (File)
© AFP 2022 / AHMAD AL-RUBAYE

Thus, it is hardly surprising that Turkey and Iran have recently joined their efforts to tackle the looming threat of instability in the region.

Bayraktar is keen to stress that, "The visit of Iran's Chief of Staff [Major General Mohammad Baqeri] to Turkey and the establishment of military contacts between [Tehran and Ankara] for the first time since the Iranian Revolution [of 1979] indicate that currently Turkey and Iran are facing a common threat."

Indeed, on August 16 Turkish and Iranian military leaders held talks on the Syrian conflict and counter-terrorism as well as the issue of dealing with Kurdish militants in the Turkish-Iranian border region, Reuters reported.

To add to the controversy, the future of the Kurdish militias could also be hanging in the balance despite they are currently enjoying the US military support, Bayraktar noted.

He referred to the fact that Brett McGurk, who serves as Special Presidential Envoy for the Global Coalition to Counter ISIS at the US Department of State, recently met with sheiks of all major tribes in the Raqqa province.

Excellent meetings with sheikhs of all major tribes in #Raqqa Province, committed to destroying #ISIS & restoring life to their communities. pic.twitter.com/pY6rTO5jlP

​According to Bayraktar, the meeting immediately prompted speculations that the US was harboring plans to form a new Arab coalition in Syria.

"The Kurds are concerned about whether the US will turn its back on them," Bayraktar told Sputnik, "The crux of the matter is that recently the CIA suspended its program to organize [military] operations of the Syrian opposition. The Kurds fear that the same will happen to them when the Raqqa operation is completed."

Battle for Idlib: How Damascus Could Benefit From Jihadi Takeover
Meanwhile, the issue of the liberation of Idlib also deserves special attention, according to the analyst.

Bayraktar explained why the resolution of the crisis simmering in the province should be orchestrated by Russia, Iran, and Turkey, and not by the US-led coalition.

"If they [Russia, Turkey, Iran] agree on the issue of protecting the territorial integrity of Syria, the best option would be to unite these three countries with the legitimate forces within the Syrian state and conduct a joint sweep of territories from terrorist elements," the Turkish political analyst stressed.

He further warns that, "If this doesn't happen, then the US will manage to extend its influence to Idlib through its coalition."

The analyst underscored this course of events would neither meet the interests of Russia, Turkey, and Iran and would throw into question the future of the Syrian government.

"In light of this, I believe that the US and its allies shouldn't be let solving the issue of Idlib on their own," Bayraktar emphasized. "While speaking about the US allies, it is necessary to keep in mind Arabs from the Persian Gulf countries. Their position on the situation in the region ultimately led Syria to the present state of affairs."