US Dragging Ukraine Over the Coals With Exorbitant Coal Prices 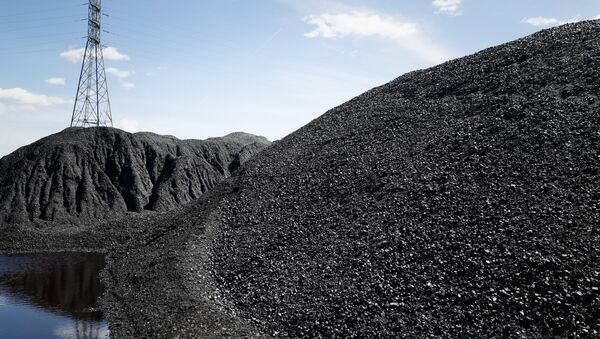 This week, Ukrainian and US officials celebrated the first shipment of US thermal coal to Ukraine. Speaking to Sputnik, European energy specialist Gary Cartwright said that while the shipment makes little to no sense economically for Kiev, it does have important an geo-economic significance for Washington.

On Monday, the Ukrainian Embassy in Washington confirmed that US energy company XCoal Energy & Resources had prepared its first shipment of coal to Ukraine as part of a deal with Ukrainian state electricity generation company Centrenergo PJSC. The same day, the US Department of Energy, the US ambassador to Ukraine and XCoal officials celebrated the shipment.

US Makes First Coal Shipment to Ukraine - Kiev
The energy deal, reached during Ukrainian President Petro Poroshenko's visit to Washington in June, has been lambasted by economists and political commentators alike, who explained that Ukraine's decision makes absolutely no sense economically, since coal from both the blockaded Donbass region and from Russia is significantly cheaper.

Speaking to Radio Sputnik, political scientist Gary Cartwright, a former European Parliament official specializing in energy and environmental policy, explained that economics aside, there are important political and strategic considerations behind this "symbolic" agreement.

"In terms of [coal's] contribution to Ukraine's energy mix, [the US supplies are] actually insignificant," the expert stressed. "We're talking 700,000 metric tons. That's going to produce 1.4 million megawatts. If we put that into perspective, Ukraine's annual consumption of electricity is 143 million megawatts. So we're talking about 1% of its total consumption. So in energy terms it's not that significant; of course, we're talking about one deal; there may be more in the future," he added.

At the same time, Cartwright agreed with other experts that the deal makes no sense for Kiev cost wise. "Economically, it makes very little sense. I'm not entirely sure of the cost of this, given the [declared] cost of $113 per ton. That must include shipment and various other costs, because the price of thermal coal at the moment is $49.75 per metric ton. I'm sure this coal could have been sourced far more cheaply elsewhere. So yes, of course, this is a political gesture by the US government," the expert said.

Yet there is another important but rarely mentioned aspect to this story worth mentioning, according to Cartwright. "Traditionally, because the US views energy as a strategic resource, it is not actually allowed under its own laws to export energy. That changed initially with the LNG shipments to Lithuania. Now [there's] coal [to Ukraine]. So this is actually a major political change for the Americans, in that they are now going to be energy exporters. That's a very important factor in what we're seeing at the moment."

No Competition: Why US LNG No Match for Russian Natural Gas in Europe
In other words, qualitatively, if not quantitatively, the US is using the Ukrainian coal agreement to signal its willingness and ability to serve as an energy supplier for European countries. Whether other cost-conscious Europeans will be willing to spend more on energy to stick it to Russia is another story. In any case, Washington's ongoing efforts against the Nord Stream 2 deal between Moscow and Western European countries is an indication that they will not give up on trying to sell their energy to the EU, whether it makes economic sense or not.

Ukraine has been in the grips of an energy crisis since January, when a group of Ukrainian ex-paramilitaries and lawmakers blockaded sections of freight rail links to coal-rich Donbass territories outside of Kiev's control. Implicitly approved by Kiev, the blockade led to a disruption in anthracite coal deliveries to Ukraine, forcing authorities to introduce emergency measures in the energy sector to save resources.