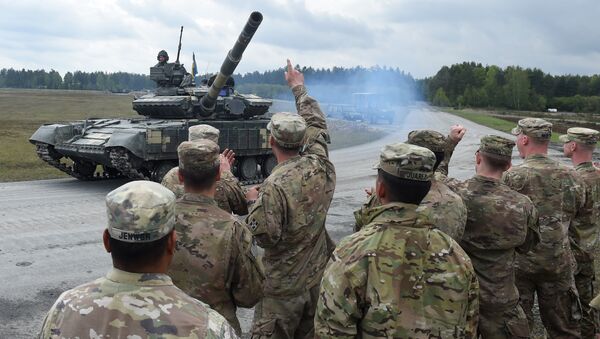 © AFP 2021 / Christof STACHE
Subscribe
A senior Russian lawmaker claims that the United States clearly intends to bolster its military presence in Ukraine, which will cause Russia to retaliate and reinforce its borders as a response.

MOSCOW (Sputnik) — The United States clearly intends to bolster its military presence in Ukraine, which will cause Russia to retaliate and reinforce its borders as a response, a senior Russian lawmaker told Sputnik Thursday.

Earlier in the day, US Defense Secretary James Mattis, during his Kiev visit, said that Washington planned to strengthen its relations with Ukraine at the strategic level in order to ensure peace and stability. The defense secretary added that Washington had recently approved deliveries of various technology worth $175 million, including special equipment that would boost Ukraine's defense capabilities.

"It is clear that everything seems to indicate that the United States will increase its military presence in Ukraine. We are going to take retaliatory measures and reinforce our borders as these developments happen close to our territory," Igor Morozov said.

Ukraine: New US 'Buffer Zone' Against Russia
According to the lawmaker, this reinforcement might be analogous to last year's deployment of two inter-service and one tank divisions in Russia's Western Military District and of Iskander missile systems in the Kaliningrad exclave bordering Poland and Lithuania.

"That was a response to the deployment of the US missile defense in Romania. In this case it is also necessary to react," Morozov stated.

The lawmaker went on to point out that, according to the statements made by the US officials, the country was not actually interested in resolving the Ukrainian crisis.

"Such absurd statements, attributing responsibility for the implementation of the Minsk agreements, have been made by Washington so far. This suggests that [the United States] is still trying to use this issue in order to put pressure on Russia and on President Vladimir Putin," Morozov emphasized.

Russia has repeatedly stated that the delivery of weapons to Ukraine would not contribute to the settlement of the Ukrainian crisis, nor to the implementation of the Minsk agreements. Moscow has further noted that supplying munitions might be perceived by Kiev as encouragement to continue military action.

000000
Popular comments
Minsk II Agreement comes to it's conclusion on September 16 2017. The US Ambassador has been bragging that NATO will be in Ukraine by the end of August 2017, just before the next US Debt Ceiling Implodes. Ukraine, a non-NATO nation, so if the US want to officially be in Ukraine, with their lethal weapons, they can have no problems if Russia lends a hand in Eastern Ukraine. What is interesting, is the fact that all the retired Generals, working in Team Trump, might have cut their teeth in the illegal war in Iraq, however. They created a'No Fly Zone', so only NATO planes could fly. How many NATO pilots have 'dog fight' skills? How many NATO nations have gone up against Forces that belong to a super-power and not a nation that has minimal defence resources? The military industrial complex might be believing they can lay down the law, however, since Russia's display in Syria, many nations are realising that the US MIC, only has the Emporer's New Clothes to offer and rather expensive at that.
anne00marie
25 August 2017, 01:33 GMT1
000000
This is because Russian leaderships shows weakness and americans take advantage
Maxi
25 August 2017, 01:46 GMT
000000
Newsfeed
0
New firstOld first
loader
LIVE
Заголовок открываемого материала
Access to the chat has been blocked for violating the rules . You will be able to participate again through:∞. If you do not agree with the blocking, please use the feedback form
The discussion is closed. You can participate in the discussion within 24 hours after the publication of the article.
To participate in the discussion
log in or register
loader
Chats
Заголовок открываемого материала
Worldwide
InternationalEnglishEnglishMundoEspañolSpanish
Europe
DeutschlandDeutschGermanFranceFrançaisFrenchΕλλάδαΕλληνικάGreekItaliaItalianoItalianČeská republikaČeštinaCzechPolskaPolskiPolishСрбиjаСрпскиSerbianLatvijaLatviešuLatvianLietuvaLietuviųLithuanianMoldovaMoldoveneascăMoldavianБеларусьБеларускiBelarusian
Transcaucasia
ԱրմենիաՀայերենArmenianАҧсныАҧсышәалаAbkhazХуссар ИрыстонИронауОssetianსაქართველოქართულიGeorgianAzərbaycanАzərbaycancaAzerbaijani
Middle East
Sputnik عربيArabicArabicTürkiyeTürkçeTurkishSputnik ایرانPersianPersianSputnik افغانستانDariDari
Central Asia
ҚазақстанҚазақ тіліKazakhКыргызстанКыргызчаKyrgyzOʻzbekistonЎзбекчаUzbekТоҷикистонТоҷикӣTajik
East & Southeast Asia
Việt NamTiếng ViệtVietnamese日本日本語Japanese俄罗斯卫星通讯社中文（简体）Chinese (simplified)俄罗斯卫星通讯社中文（繁体）Chinese (traditional)
South America
BrasilPortuguêsPortuguese
NewsfeedBreaking
00:52 GMTTrump Expresses Sympathy for US Capitol Riot Suspects Ahead of September 18 Rally
YesterdayUS Approves $500Mln Military Sale to Saudi Arabia to Support Copter Fleet - Pentagon
YesterdayMinneapolis Police Department Buys ‘Not-Reaching Pouches’ to Reduce Deadly Traffic Stops
YesterdayTexas Governor Says Biden Administration Had Plans to Close Section of US-Mexico Border
YesterdayBotched FBI Probe Into Nassar Abuses Highlights ‘Endemic Failures’ Within Bureau, Former Agent Says
YesterdayTwitter Goes Bonkers After Star Batsman Virat Kohli Quits as Skipper of India's T20I Cricket Team
YesterdayHuman Hair as Pet Food? Indian Scientists Develop Unique Way to Use Keratin Waste
YesterdayBiden Retrieved on New Attack Ad Against Buttigieg Over Fears of Reprisal, Book Claims
YesterdayHow New Book About Trump Misfired, Inflicting Further Damage to Biden's DoD After Afghan Debacle
YesterdayUS Grand Jury Indicts Clinton-Linked Attorney for Making False Statements to the FBI
YesterdaySpecial Counsel Durham Allegedly Seeking to Indict Lawyer at Firm With Ties to 2016 Clinton Campaign
YesterdayOne Assassin Can Shift The Balance: Ex Lawmakers Say US Gov't Still Vulnerable to Attacks After 9/11
YesterdayPopulariser of Home Computers Sir Clive Sinclair Dies at 81
Yesterday2024 Republican Presidential Candidates Lay in Wait for Donald Trump’s Decision
Yesterday'Campaign to Destroy Trump'? Why Is POTUS 45 Under Fire Amid Defamation Suit and How Political Is It
YesterdayLabour Foreign Spokeswoman Urges ‘Strategic’ Nuke Sub Response to China’s ‘Genocide’
YesterdayFrance Reportedly Cancels Washington Gala After 'Betrayal' Submarine Deal
YesterdayUnbelievably Slow Hypersonic Bureaucracy
YesterdayIran Expected to Become Member of Shanghai Cooperation Organisation Led by Russia, China
YesterdayEx-Officer Chauvin Pleads Not Guilty in Police Brutality Case Involving Teen