Moscow: Poroshenko's Words on US Cooperation Inappropriate Amid Donbass Truce 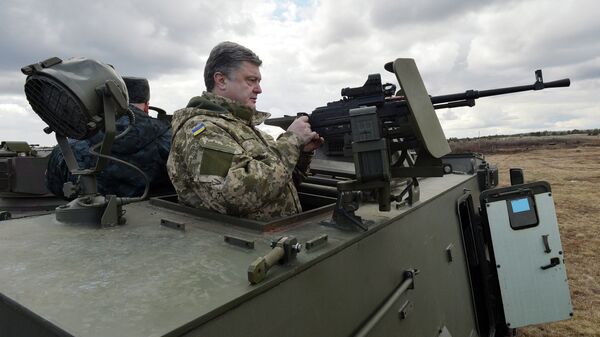 Russia's envoy to the Trilateral Contact Group on Ukraine says that Poroshenko's desire to widen the scope of military industry cooperation with the US is inappropriate in the light of a new truce agreement.

MOSCOW (Sputnik) — Ukrainian President Petro Poroshenko's statement about expanding defense industry cooperation with the United States as well as potential US deliveries of lethal weapons to Kiev are inappropriate in light of a new ceasefire regime taking effect in Donbass on Friday, Russia's envoy to the Trilateral Contact Group on Ukraine, Boris Gryzlov, said.

On Thursday, speaking at a joint briefing with US Defense Secretary Jim Mattis, Poroshenko said they had discussed the expansion of defense industry cooperation between the two countries. Mattis also said the United States had been considering deliveries of lethal weapons to Ukraine.

McCain: Mattis' Ukraine Visit Opportunity to Provide Lethal Assistance
"The willingness to get lethal weapons from the United States, once again announced by President Petro Poroshenko, does not correspond to an image of a peacekeeper, which the Ukrainian president wants to have. Such statements are especially inappropriate on the eve of the entrance into force of an agreement on the permanent ceasefire regime in Donbass on August 25, approved [on Wednesday] in Minsk by the Contact Group [on Ukraine] and supported during telephone talks between leaders of the Normandy Four countries on August 22," Gryzlov said as quoted by his press service.

The Russian envoy stressed that Kiev's reiterated desire to acquire lethal weapons "will undoubtedly be perceived in Donbass as a very bad, threatening signal."

On Wednesday, Gryzlov said that the Contact Group had agreed on a ceasefire regime, the so-called "school truce" from August 25 in connection with the beginning of the new academic year in the region.

Ukraine's authorities have been conducting a military operation in the country's eastern regions since April 2014, after local residents refused to recognize the new government in Kiev. In February 2015, Kiev and the Donbass militias signed a ceasefire agreement but, despite the deal, both sides have been reporting violations of the ceasefire.