No Wonder US Forces in Morale Crisis 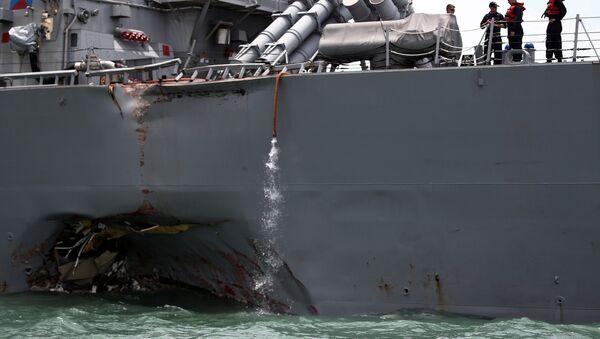 Finian Cunningham
All materials
The spate of deadly US Navy collisions is a symptom of a wider morale crisis among American military forces. Part of the reason is that American troops are simply exhausted from being abused by political masters in Washington.

“Over-stretch” is one way of putting it. American forces continue to be assigned in overseas wars and operations around the globe with no end in sight. And for no credible purpose either.

This is not just a Navy problem. It affects all other branches of the US military: Army, Air Force, the Marines and National Guard.

When President Donald Trump announced his brazen U-turn sending more American troops back to Afghanistan, the move had the backing of the Pentagon’s top brass. No doubt stock prices for US arms manufacturers spiked.

The Never-Ending War: US Misrepresents Troop Numbers in Afghanistan by Thousands
But what about ordinary American soldiers? One can imagine renewed Afghan missions are not welcome, given that the US has been fighting its longest war – 16 years – in that country known as the "Graveyard of Empires."

Any army is only as good as the morale among soldiers. Morale depends on having a respected leadership and a credible just cause. In America’s case, there are neither of these attributes, therefore it is no surprise that morale diminishes, as does fighting effectiveness. Look at the appalling record of US military defeats or failures.

The fatal collision of a US Navy guided-missile destroyer this week with an oil tanker near Singapore – in which 10 missing American crew are feared dead – was the fourth major accident involving the Pacific 7th Fleet this year alone. The admiral of the fleet has been dismissed from his command post.

Several military commentators are pointing to low morale among rank-and-file Navy members, from being forced to spend longer periods at sea on deployment, with little training and demanding work hours.

Rules Must Be Obeyed: Destroyer USS McCain Crashes Over 'Negligence'
As a report in military.com noted: "Operational demand around the globe… means less time at home for rest and training; crews are therefore operating with greater stress and exhaustion levels."

The report quotes Congressman Rob Wittman, of the House Armed Services Committee, saying: "I believe that there are even more basic causes for this systematic operational failure of our fleet including a demanding operational tempo, limited training opportunities and inadequate funding to support basic needs."

But here’s the paramount issue that is not mentioned. Why are US forces being increasingly despatched to Asia-Pacific?

Of course, it is to do with US imperial objectives of confronting China over its alleged expanding influence in that region. The ramped-up tensions with North Korea are also connected to the US aim of curtailing China.

When we say the "US aim" we mean precisely the ruling class and their imperial designs. What ordinary Americans get out of this strategic "Asian Pivot" is far from certain. Combine dubious mission with dubious leadership, long months away from home under wearying conditions, and is it any wonder that morale of crew members sinks?

The problem is much bigger than the US Navy and the Asia-Pacific. The American military must be the most internally conflicted force there is. The surge in wars ever since the September 11 terror incidents in 2001 was supposed to be about "defeating terrorism."

All too often, however, that official purpose has been distorted to serve ulterior objectives, such as regime change. How must American troops, navy and air men feel when they realize that their own commanders and intelligence agencies are supporting the same terrorists that the rank-and-file soldiers are supposed to be combating?

American troops no doubt know what’s going down on the ground. They will know that the Pentagon and CIA are arming and training terrorist death squads in Syria, Iraq, and, yes, Afghanistan.

Russia’s foreign ministry reported this month that foreign jihadist fighters are being flown by “unidentified” helicopters to various parts of Afghanistan. Some Taliban units have been identified driving US Humvee military vehicles. This covert duplicity all sounds like a repeat of America’s dirty wars in Syria and Iraq, where thousands of American troops were killed or maimed for life.

What's Behind Increasing Numbers of Collisions Involving US Warships
Over the past century, American forces have been involved in dozens of wars around the world. A case can be made that the First and Second World Wars were a just cause for the Americans. But all the other conflicts have been simply wars of aggression, carried out for some ulterior nefarious purpose. The official pretexts for these wars are always shown eventually to be fraudulent, whether it was fighting Soviet expansionism as in Korea and Vietnam, or fighting terrorism as in Iraq and Afghanistan. Or, the biggest fraud of all, to protect human rights as in Libya and Syria.

The history of crimes and lies is catching up with American imperialism. Its never-ending need for wars around the world is no longer tenable. The US is not pursuing some noble crusade. It never has been. It is a warmongering state that is addicted to wars of conquest in order to satisfy the economic lust of its elites.

It’s easy for armchair generals like Donald Trump and his Joint Chiefs of Staff to threaten nuclear war against North Korea. But nobody of a sane mind could possibly accept this criminal recklessness.

In a recent media commentary, a former US nuclear missile launch officer, Bruce Blair, said that no-one among serving officers believes that Trump has any right to launch a pre-emptive strike on North Korea.

The inference is that there is widespread distrust of the American leadership and its motives. That again leads back to the issue of morale crisis among America’s military forces, across all sectors.

A military force is only capable if it has the will to fight a clearly identified enemy, whom it views as a threat to their country and compatriots.

Trump's Afghanistan Plan: 'US Will Step Up Meddling in Other States' Affairs'
For decades the American military has been abused with official lies and debased to conduct heinous crimes against humanity. But increasingly it seems the only enemy the US armed forces are up against are the rulers in Washington, with their imperialist schemes of world domination.

More than 80 years ago, the most decorated American soldier, Marine Corps Major General Smedley Butler (1881-1940), came to the stark conclusion that "war is a racket" – at least American wars are. Butler described his 34 years of service fighting wars in the Philippines, South America, the Caribbean, and China as being "a racketeer, a gangster for capitalism."

One might conjecture that this realization is dawning on more and more serving US personnel. Their operations, sacrifices and violence against others is not for any just cause. This realization inevitably leads to flagging morale among ordinary servicemen, whether they are riding in a Humvee in the Middle East, installing missile systems in NATO countries on Russia’s border, or sailing ships that threaten nuclear war with North Korea and China.

Sooner or later, the lousy paycheck and missing family at home no longer makes sense or morality. To hell with it, as Smedley Butler declared.