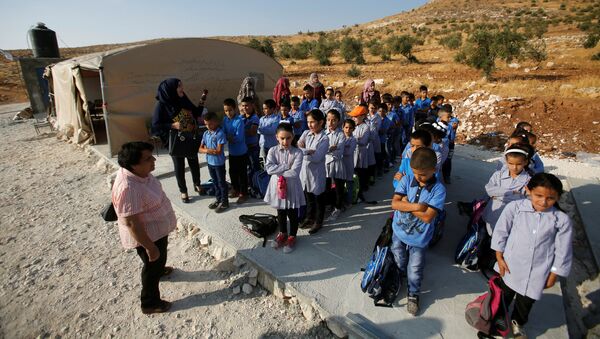 © REUTERS / Mussa Qawasma
Subscribe
The EU missions in Jerusalem and Ramallah issued a joint statement on Thursday, calling on the Israeli government to stop the confiscation of Palestinian property and the demolition of its educational facilities in the light of recent events in the West Bank.

MOSCOW (Sputnik) – On Tuesday, the Israeli Civil Administration (CA) officials demolished an elementary school building in the village of Jubbet adh-Dhib, located near Bethlehem, leaving nearly 80 pupils without an education facility only one night prior to the beginning of the Palestinian school year.

"In line with its long-standing position on this issue, the EU calls upon the Israeli authorities to halt demolitions and confiscations of Palestinian houses and property in accordance with its obligations as an occupying power under international humanitarian law, and to cease the policy of settlement construction and expansion, of designating land for exclusive Israeli use and of denying Palestinian development," the statement read.

The EU representatives also urged the Israeli authorities to return the confiscated equipment.

"Every child has the right to safe access to education and States have an obligation to protect, respect and fulfil this right, by ensuring that schools are inviolable safe spaces for children," the statement stressed.

Israeli Forces Detain at Least 20 Palestinians in West Bank, East Jerusalem
On August 9, the Israeli CA officials confiscated solar panels donated by an international organization, which had been providing electricity for a school and kindergarten in Abu Nuwar community.

On Monday, the officials confiscated a pre-fab that served as a kindergarten in Jabal el Baba, a small community east of Jerusalem.

Relations between Israel and Palestine have been shattered for decades. Palestinians seek diplomatic recognition for their independent state on the territories of the West Bank, including East Jerusalem, which is partially occupied by Israel, along with the Gaza Strip. The Israeli government refuses to recognize Palestine as an independent political and diplomatic entity, building Israeli settlements and dismantling the Palestinian property in the occupied areas, despite objections from the United Nations.