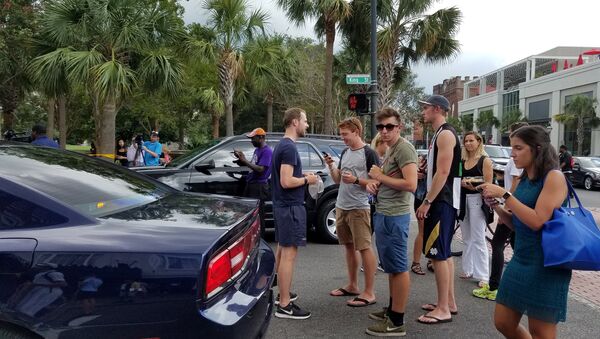 © AP Photo / Harriet McLeod
Subscribe
One man is dead and the alleged perpetrator is in critical condition and in police custody after an armed gunman took over Virginia's on King, an upscale eatery in a historic district of Charleston, South Carolina.

The city's mayor confirmed the end of the hours-long hostage situation in the restaurant.

Police shot the hostage-taker and medics have transported him to a hospital. Paramedics rushed the other victim out of the restaurant on a stretcher, but he has been confirmed as killed.

The suspect walked out of the kitchen of Virginia's on King wearing an apron and holding a revolver. He apparently told the staff to evacuate, then locked the front door and ordered all patrons to the back of the restaurant, from which some people were able to flee. After locking the door, the gunman announced he was the "new king" of Charleston.

Officials described the individual as a "disgruntled" former worker at the eatery. The incident is not being called an act of terrorism or a hate crime, Charleston Mayor John Tecklenburg said.

​"We do know already at this point that the shooter is a disgruntled employee. This is not an act of terrorism, it's not a hate crime, it's a disgruntled employee who has come on the scene of the employment. We are ready for the situation, no matter what happens," Tecklenburg told reporters Thursday afternoon.

​​Police cordoned off the immediate area as the hostage situation unfolded.

The area was put on lockdown while police dealt with the shooter, and King Street was blocked to motorist and pedestrian traffic.

​SWAT teams and a bomb squad were also called in to help secure the situation, witnesses said on social media.