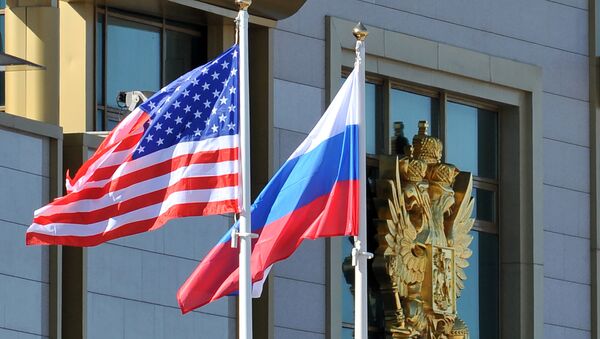 © AFP 2022 / MLADEN ANTONOV
Subscribe
Former foreign policy adviser to Senate Republican leaders Jim Jatras claims that the US-Russia conflict could go much further than visa disruptions, involving much tougher sanctions on both sides that could inflict hardship and suffering on many people.

WASHINGTON (Sputnik) — The US-Russia conflict could go much further than visa disruptions, involving much tougher sanctions on both sides that could inflict hardship and suffering on many people, former foreign policy adviser to Senate Republican leaders Jim Jatras told Sputnik.

On Monday, the US embassy in Russia announced that non-migration visa processing would be suspended on Wednesday, August 23. The embassy said Moscow's requirement to cut its staff to 455 diplomats and technical personnel would also affect "the scheduling of a limited number of migration visa applications."

"More sanctions will come from both sides, no doubt asymmetrically to inflict as much pain as possible," Jatras said on Tuesday. "The new Cold War can only deepen."

Ordinary Russians who wanted to visit or work in the United States would be the main victims of the new US policy, Jatras pointed out.

Moscow Criticizes Work of US Visa Departments in Russia
"The ‘hit’ in this round of the sanctions tit-for-tat was inevitably going to be felt by the far larger number of Russians applying to visit the US than Russian visas issued to Americans," he said.

It was unclear whether the restriction of US visa opportunities to Russians was a deliberate effort to inflict pain on the type of Russians who might have reason to travel to the United States, Jatras remarked.

It could also have been "simply a mechanical reflection of the American inability to deal with the visa processing load with fewer hands to do it. But the impact on ordinary Russians is the same," he said.

The latest US move meant that Russia would be increasingly isolated from the rest of the world creating conditions reminiscent of the Cold War era, Jatras cautioned. Jatras expressed his fear that the dynamic of aggressive moves by the US government countered by Russian responses could increase the dangers of conflict between the two nations.

"This is bad… Except that this time the ‘Iron Curtain’ is not the result of Russians’ own government’s barring them from leaving," he said.

Whether or not the Russians regard this as a new hostile act or just fallout from previous actions isn’t particularly important, Jatras claimed.