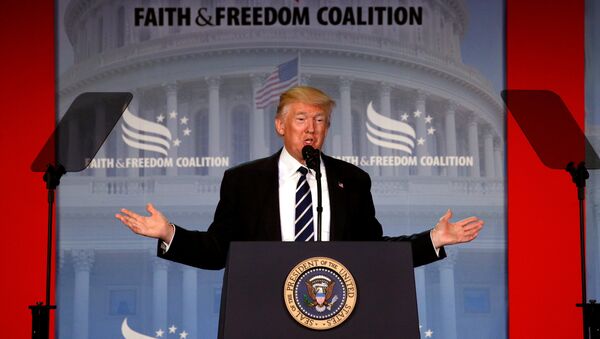 © REUTERS / Kevin Lamarque
Subscribe
According to Mayor Greg Stanton, Donald Trump failed in his responsibility to unite the nation by giving a divisive speech in the Phoenix.

WASHINGTON (Sputnik) – President Donald Trump failed in his responsibility to unite the nation by giving a divisive speech in the Phoenix, Arizona on Tuesday night, which blasted the nation’s mainstream media for its coverage of a violent rally earlier in the month, the city’s Mayor Greg Stanton said in a statement.

"Unfortunately, last night the president gave a speech that continued to divide this country," Stanton said on Wednesday. "He did nothing to unite this country… Instead of talking politics, or attacking the media… instead what he should've done is said this is the time for the country to come together, let's be united."

Trump Blasts 'Fake' Media for Misrepresenting His Stance on Far-Right Groups
On Tuesday, Trump first traveled to a US-Mexico border post in the town of Yuma to emphasize his determination to build a wall to halt illegal border crossing. Later, Trump spoke to a supportive crowd in Arizona’s largest city of Phoenix.

In his speech, Trump focused on media criticism that followed an August 12 white nationalist rally in the city of Charlottesville, Virginia, which sparked violent clashes with counter demonstrators that resulted in the killing of one counter-protestor.

Stanton said that Trump should have made it clear and unequivocal that he stands against any kinds of hate groups. "He [Trump] failed to do it again last night in Phoenix," the mayor stated.

In his speech, Trump recounted statements following the Charlottesville rally, in which he condemned the Ku Klux Klan and neo-Nazis, two of the most prominent white supremacist groups.

Trump’s main criticism is that the US media has failed to report on the left-wing anti-fascist protesters — under the banner of Antifa. The a group includes a radical fringe of masked, helmeted demonstrators that advocates physical attacks on political opponents.