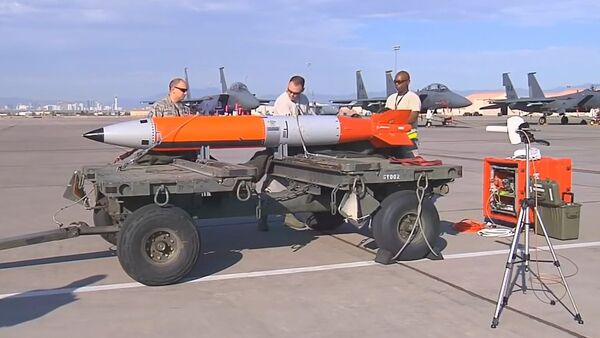 © Photo : Youtube/Phylicia Nordyke
Subscribe
International
India
Africa
Martin Schulz, the leader of the German Social Democratic Party (SPD) and candidate for the post of German chancellor, has vowed to ask Washington to withdraw US nuclear weapons from German territory if he defeats Chancellor Angela Merkel in federal elections next month.

Schulz made the pledge at a campaign event in Trier, western Germany on Tuesday.

"As chancellor, I will commit Germany to having the nuclear weapons stationed here withdrawn from our country," the SPD leader said.

"The upper limit for nuclear weapons in our country must be zero. We want the withdrawal of all US nuclear weapons from the Federal Republic," Schulz added in a tweet on Wednesday.

Responding to Schulz's comments, German government deputy spokesperson Ulrike Demmer said Wednesday that Berlin's policy is to keep US nuclear weapons stationed in the country so long as countries exist which see nuclear weapons as a possible means for use in the event of a military conflict.

Germany Needs US Nuclear Weapons as Long as External Threats Exist - Gov’t
Demmer added that the German government supports the "global zero" goal –i.e. the complete abandonment of nuclear weapons, and that this goal is shared by many of Germany's NATO and EU allies.

At the campaign event, Schulz, whose party is polling at 24.5% next to Merkel's Christian Democratic Union and its Bavarian Christian Social Union allies, who are polling at 39.5%, also criticized US President Donald Trump's demand that NATO countries raise their total military spending to 2% of GDP.

"Trump demands that 2% of GDP - €30 billion – should go to military spending, and [Chancellor] Merkel agreed to this without asking German citizens," the candidate said. "What to do with our money is the central question of this election," he added, promising to spend the money on non-military needs.

About 20 US B61 nuclear warheads are presently thought to be stationed at a military base in Buechel, western Germany.

Germans will go to the polls in federal elections September 24. Most political observers believe that Chancellor Merkel is set to win a fourth term.