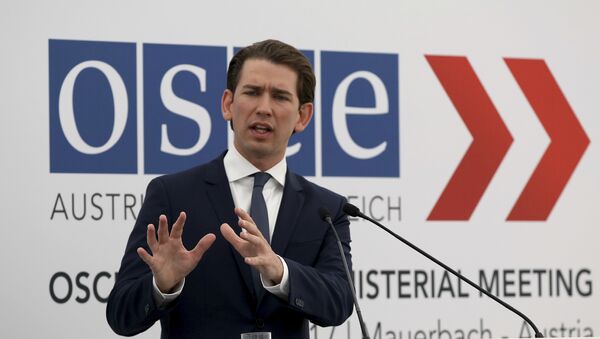 OSCE Chairperson-in-Office and Austrian Foreign Minister Sebastian Kurz thanked the leaders of the Normandy Four format for their support for the ceasefire, but noted that there were still many steps to be made in order to ensure peace in Donbass.

VIENNA (Sputnik) — OSCE Chairperson-in-Office and Austrian Foreign Minister Sebastian Kurz welcomed on Wednesday the agreement on ceasefire in Donbass from August 25, that has been reached by members of the Trilateral Contact Group on Ukraine, and called on the sides to comply with their commitments.

Russian Envoy Calls for 'School Truce' in Donbass as Academic Year Looms
Earlier in the day, the Trilateral Contact Group on Ukraine held a meeting in Minsk and agreed on a ceasefire in Donbass from August 25. According to OSCE Special Representative Martin Sajdik, "the sides shall take all necessary steps to ensure that the ceasefire is sustainable." Ukraine's self-proclaimed people's republics of Donetsk and Lugansk confirmed that they were ready to observe the truce.

"I welcome this initiative by the sides to put the lives and well-being of civilians first as the new school year gets underway. I call on the sides to live up to their own commitments and finally establish and respect a full and permanent ceasefire," Kurz said as quoted in a press release.

He thanked the leaders of the Normandy Four format for their support for the ceasefire, but noted that there were still many steps to be made in order to ensure peace in Donbass.

"I once again remind all sides of the need to allow the OSCE Special Monitoring Mission to Ukraine safe and unhindered access across the conflict area, so that through their reporting and monitoring, they can help the sides establish a lasting peace," Kurz said.

Kiev Strengthening Donbass Blockade - Russia's Contact Group Envoy
A military conflict in Ukraine has been ongoing since 2014, after the residents of Donbass refused to recognize the new Ukrainian government that had come to power in what they perceived to be a coup. In February 2015, the parties to the Ukrainian conflict signed the Minsk peace accords in an effort to end the fighting in the crisis-torn region.

The Trilateral Contact Group on the settlement of the Ukrainian crisis, with representatives from Ukraine, Russia and the OSCE, was set up in 2014 to promote direct dialogue between Ukraine’s conflicting parties.