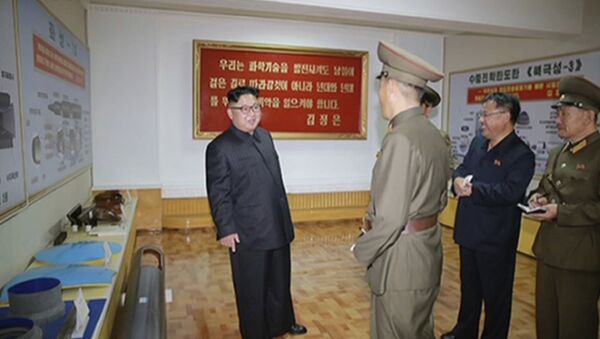 North Korean leader Kim Jong-un traveled to the Chemical Material Institute of the Academy of Defense Science, a visit that was photographed by the Korean Central News Agency (KCNA). As Kim toured the facility where rocket engines and warhead tips are researched, concept diagrams of new missiles were visible behind him in one photo.

One of the designs was labelled "Pukguksong-3." Another diagram, less visible, was labelled "Hwasong." Both missile series have been the subject of high-profile missile tests in recent months.

The intermediate-range Pukguksong-2 was tested in February and again in May. These tests shocked the international community, as North Korea was not expected to develop solid-fuel missiles until the 2020s at the earliest. Solid fuel rockets are a major leap forward: unlike liquid fuel rockets, they can be powered off-site and then fired within minutes of arriving at the launch platform. They are also faster and more reliable than liquid fuel rockets, making them far harder to intercept.

For the moment, North Korea's solid-fuel rockets are experimental — but perhaps not for much longer. "If and when this happens, it will give North Korea a robust second-strike capability against targets in South Korea and Japan," wrote aerospace engineer John Schilling with North Korean analysis think tank 38 North in May. "[This will] give them the ability to retaliate if they are the victims of someone else's first strike, and to credibly threaten retaliation in order to deter an attack in the first place."

The Pukguksong-1 was a submarine-launched ballistic missile (SLBM). Missile experts believe that Pyongyang modified the existing missile to create the land-based variant, the Pukguksong-2.

"North Korea appears trying to demonstrate that it can build a re-entry vehicle and it would test-fire an upgraded version of an SLBM or a ground-to-ground missile based on the technology," said Lee Choon-geun, a senior research fellow at the Science and Technology Policy Institute, to South Korean news agency Yonhap.

The Hwasong series is similarly concerning to the United States, South Korea, and other DPRK opponents. In perhaps the most notorious North Korean missile test of 2017 (and that's saying something), Pyongyang test-launched their Hwasong-14 intercontinental ballistic missile (ICBM) on July 4, American Independence Day. A second Hwasong-14 test occurred at the end of the month.

Various analysts chimed in that the Hwasong-14 could threaten the US mainland: Alaska and Hawaii, Los Angeles, Chicago, perhaps even New York City or Washington DC.

Kim has pushed for continued missile development in spite of signs of a thaw in the bellicose stand-off of the US bloc against the DPRK. "He instructed the institute to produce more solid-fuel rocket engines and rocket warhead tips by further expanding engine production process and the production capacity of rocket warhead tips and engine jets by carbon and carbon compound material," read the KCNA report.

All nuclear powers except for North Korea and Pakistan (who do not have any ICBMs) use solid-fuel in their long-range missiles. Schilling estimated that North Korea would have functional solid-fueled ICBMs deployed by 2025 at their current rate of development.

"There are concerns that North Korea's nuclear and missile capability is nearing the threshold of [the red line]. North Korea should stop acts that boost tensions on the Korean Peninsula," said Baik Tae-hyun, spokesman for South Korea's Ministry of Unification (meant to increase cooperation and dialogue between the two Koreas).