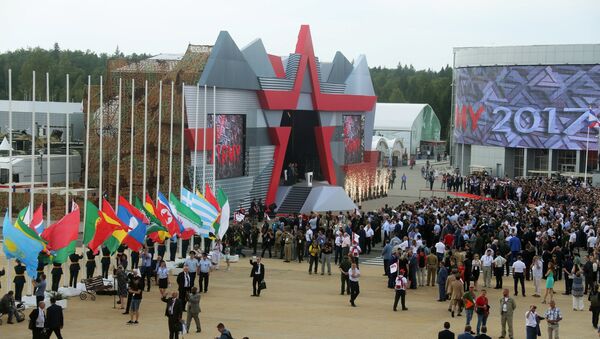 © Sputnik / Vitaliy Belousov
/
Go to the mediabank
Subscribe
International
India
Africa
Military observer Andrei Kotz takes a look at some of the latest and greatest military hardware and equipment on display at the ARMY-2017 military expo currently underway outside Moscow.

The third ARMY International Military-Technical Forum kicked off Tuesday across three venues, including the Alabino Military Training Grounds, Kubinka Airfield and the Patriot Exhibition Center outside Moscow. Delegations from over 100 countries are taking part in the weeklong defense extravaganza, which features over 18,000 products, from rifle ammo and equipment to next-gen tanks and armored cars.

In addition to the well-known Russian military hardware, this year's event features new products which made their debut at the exhibition. RIA Novosti military observer Andrei Kotz took a look at some of the most interesting designs and novelties.

One symbolic novelty, according to Kotz, is that the T-14 Armata, the Russian next-gen main battle tank which started mass production this year, was rolled out at the show featuring a spotted earth tone camo pattern. Previously-seen versions of the tank saw it sporting a monotone matte dark green color scheme. Now, a variant of the tank in camo closer to the Russian standard of yellow-grey, black and green khaki is being shown off at the show alongside other armored units.

​The Russian hardware isn't just standing around, either. On Wednesday, tanks, armored personnel carriers, self-propelled artillery, air defense systems and engineering units showed off their combat and maneuvering capabilities, with Sputnik capturing some of the best moments.

For the first time ever, this year's expo also includes a real-time night-time operation featuring the broad use of tracer ammunition, target-indicating flares, and other means of night-time illumination and targeting.

At the stationary exposition, this year's show features a particularly strong crop of new and prospective armored cars. JSC Remdiesel, producer of the Typhoon family of Mine-Resistant Ambush Protected (MRAP) armored vehicles, showed off several new offerings, including the Typhoon VDV (a light multipurpose vehicle for use by airborne forces), the Typhoon 4X4 armored personnel carrier, and a prototype of a new medical vehicle. 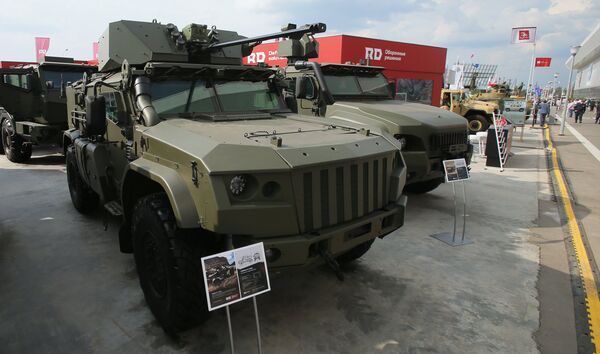 The show also lets enthusiasts to get a second look at the Buran armored car, which debuted last month at MAKS-2017. The 4x4, six-door multi-purposed armored vehicle features a monocoque armored hull structure, and carries six troops (including commander and driver) into combat. According to its creators, the vehicle can withstand shelling from any small arms with a caliber of up to 12.7 mm. 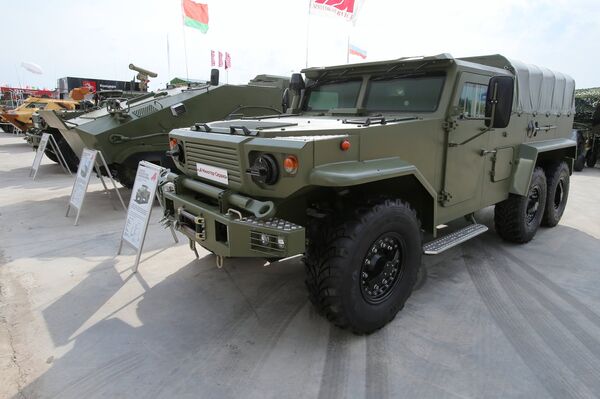 Chechen weapons makers also offered expo-goers a closer look at their new, domestically-produced military buggy – the Chaborz M-6, a light six-person vehicle specially designed for use in counterterrorism operations in difficult terrain. The highly modular vehicles can be equipped with a wide variety of weaponry, from heavy machineguns to anti-tank, anti-air and artillery systems.

In addition to heavy weapons, this year's expo focuses a lot on small arms and equipment for troops. Lobaev Arms is presenting its entire line of long-range sniper rifles, while OJSC Radioelectronika is showing off its latest mobile communications, reconnaissance and target designation systems. BTC Group JSC, meanwhile, is demonstrating new uniform designs for various branches of the armed forces. Finally, Armokom, a company known for its specialized helmets and bulletproof vests, is showing off the latest means of individual protection.

​Speaking to Kotz, Roman Samofalov, head of the marketing department at Armokom, explained that the company worked to develop its new Vulkan VKS protective kit for chopper pilots based on the experience gained in Russia's operation in Syria.

"It consists of a one-piece flight suit that can withstand temperatures up to 1,000 degrees Celsius, body armor with organo-ceramic plates, and a special vest for evacuating the pilot" from a body of water in case of crash landing. "There is also an option for tankmen – a modernized variant of the famous Cowboy kit. It provides good anti-fragmentation protection, thus reducing the damage caused by so-called after penetration effect of enemy antitank weapons," Sasmofalov explained. In fact, according to Kotz, the war in Syria is one of the central themes at ARMY-2017. "As Russian Defense Minister Sergei Shoigu said at the show's opening ceremony, the exchange of experience in the fight against terrorism between representatives of different countries will take place across many discussion venues at the forum. Patriot Park's Partisan Village military-historical complex, meanwhile, will show off trophy weapons captured by our military from Daesh."

Lebanon Interested in Russian Buggies, Armored Personnel Carriers
Alongside weapons and equipment, companies are also engaged in providing troops with the tools they need to keep them in peak physical condition, even far from home. Foreman Products, a manufacturer of sports equipment, has created a new mobile modular gym design, similar to the one used by airmen at Khmeimim airbase. The equipment, which fits into a special metal container, includes chin-up bars, dumbbell benches, a Smith machine, a frame for squats with barbells, and more, and can be used simultaneously by up to ten people.

Elena Bartashevich, Foreman Products' general director, told Kotz that the mobile gym has passed all state tests and is ready to begin production. In addition, the company is working to develop a specialized obstacle course and climbing wall for mountain units – which can also fit in a standard container. "This approach allows for the deployment of a full-fledged gym nearly anywhere where there is a flat surface – at base, at a training ground, in a tent camp," she explained.

So-called scientific units, formed in 2013 to recruit students in the technical specialties who have expressed a desire to serve in the Russian military, have also received a big platform at the forum this year. "This, if it can be put this way, is the creative elite of the army, whose task is to introduce new technologies into the forces," Kotz wrote. In particular, the 7th Scientific Company of the Military Communications Academy is showing off its new 'Complex of Software for the Visualization of the Operational Situation on a three-dimensional terrain model'.

Poland Again Beats War Drums Over Planned Russia-Belarus Zapad-2017 Drills
The system includes technology for the rapid and precise creation of relief maps with the help of computers, as well as the capability to determine the battlefield situation using a combination of 3D projected objects and special markers for manual correction.

"This is a very convenient technology for use by various headquarters where officers are planning a particular operation. It will be tested at the upcoming Zapad-2017 drills. This project was created from scratch by the guys from the 7th Scientific Company," said Lieut-Col Alexander Ershov, the head of the Research Center at the Military Communications Academy.