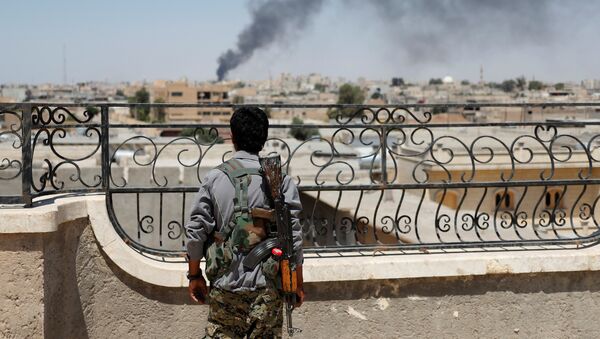 US-aligned Kurdish fighters in Syria have released several videos of their destruction of a Turkish military vehicle with a guided anti-tank missile during a skirmish between the rival militaries.

The footage depicted fighters with Jaysh al-Thuwar (Arabic for "Army of Revolutionaries") facing off with Turkish soldiers, with one fighter firing what is either a US BGM-71 TOW anti-tank missile or an Iranian Typhoon anti-tank guided missile at a Turkish tractor.

The footage was subsequently uploaded to the Facebook page of Jabhat al-Akrad ("Kurdish Front"). Kurdish Front is a subfaction of the Army of Revolutionaries, which is in turn a member of the Syrian Democratic Forces (SDF) supported by the Americans. It's unclear when the event actually occurred.

The bulk of SDF fighters are Kurds aligned with the People's Protection Units (YPG). Ankara claims that the YPG are a terrorist group, and a branch of the Kurdistan Workers' Party (PKK), a Kurdish independence movement based in Turkey (and outlawed there). Both Turkey and the US consider the PKK to be a terrorist group, but the US denies any connection between the PKK and the YPG.

Moving to distance themselves from the incident, Col. Joseph Scrocca, a US military spokesman, told Military Times that the Army of Revolutionaries is a part of the SDF coalition but they receive no specific support from the United States.

Kurdish Front, on the other hand, is directly supported by Washington.

After several months of uneasy coexistence in northern Syria, the SDF and Turkish armed forces have begun to skirmish. The United States, a NATO ally of Turkey and a supplier of weapons to both sides (naturally), continues to try to play peacemaker between its two nominal allies. However, intermittent violence continues along the Syrian-Turkish border.

Ankara, which has long protested American involvement with the YPG, has begun to court other allies as the Syrian Civil War enters its final stages. Earlier in August, Turkey inked a deal to purchase a $2.5 billion S-400 Triumf surface-to-air missile defense system from Russia. The deal came as a stated attempt to repair relations between Turkish President Recep Tayyip Erdoğan and Russian President Vladimir Putin. Russia and Turkey have been at odds since the Turks shot down one of Moscow's fighter jets in November 2015, killing the pilot.

Also in August, Iran's most senior military official, General Mohammad Baqeri, met with Erdogan and other Turkish leaders. Erdogan announced that he was considering "joint action" alongside Iran against their mutual enemy, the Kurds.

Later that month, US Defense Secretary James Mattis will visit Turkey and attempt to revive the flagging relationship.