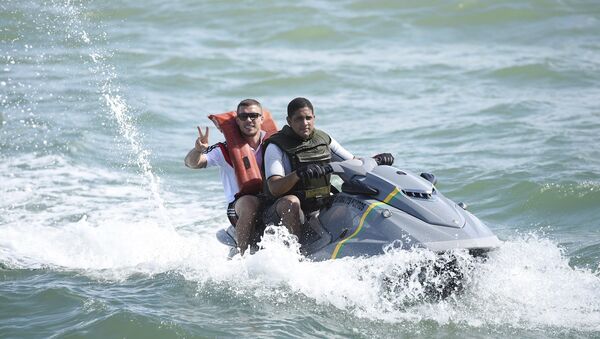 Lukas Podolski, a former Arsenal and Germany forward from the 2014 Brazil World Cup, is considering filing a lawsuit against Breitbart after the outlet's London bureau published a photo of him on a jet-ski to illustrate an article on illegal immigration.

Titled "Spanish Police Crack Gang Moving Migrants On Jet-Skis," the article included an image that was originally snapped in 2014 when Podolski, along with the German soccer team, was taking a break during that year's World Cup, according to BBC.

​Though the outlet later apologized and removed the image, the article went on to include a editor's note that said, "there is no evidence Mr. Podolski is either a migrant gang member, nor being human trafficked. We wish Mr. Podolski well in his recently announced international retirement."

"Lukas distances himself from it and won't let himself be exploited. Our lawyer is already involved," he added.

Currently playing in the J1 League for Japanese club Vissel Kobe, there has been no additional explanation of what legal action will be taken.