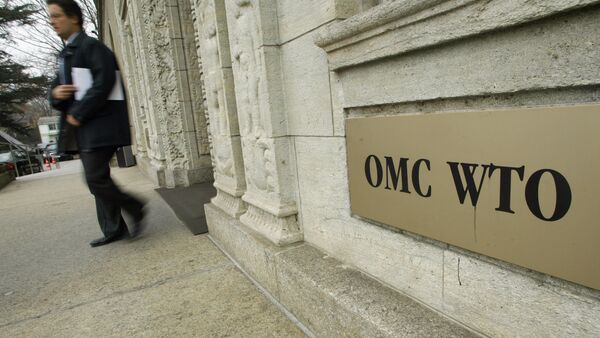 © AFP 2023 / FRED DUFOUR
Subscribe
International
India
Africa
A Senior Russian Economic Development Ministry official stated that the WTO is likely to decide on Russia's lawsuit against the EU over its domestic energy market legislation this fall.

"We are waiting for the arbitrators' decision in the dispute over the EU's third energy package in the fall," head of the ministry's trade negotiations department Maksim Medvedkov said in an interview.

The package, aimed at regulating the EU gas and electricity market, prohibits companies from both owning and operating a gas pipeline, a condition Moscow says hinders a stable supply of Russian gas to Europe.

"Consultations were held in the WTO in early June. We are preparing a request for the establishment of an arbitration group,"  head of the ministry's trade negotiations department Maksim Medvedkov said in an interview.

Earlier in August, the EU imposed five-year tariffs as high as 36.1 on Russian producers of non-stainless steels, based on the conclusion that Russian imports unfairly undercut manufacturers in Europe.