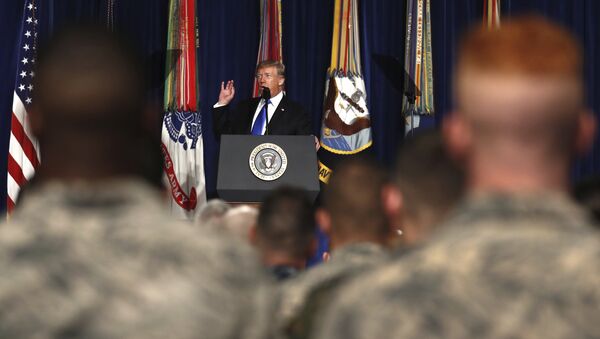 © AP Photo / Carolyn Kaster
Subscribe
US President Donald Trump highlighted during his speech on a revised US strategy in Afghanistan the importance of standing united in facing the enemy, US Ambassador to the United Nations Nikki Haley said in an interview on Tuesday.

WASHINGTON (Sputnik) — On Monday, Trump announced the new strategy for Afghanistan, which included expanded authority for US troops to target terrorists in the Asian country.

Outlining the strategy, the US president said that the United States will be solely involved in exterminating terrorists.

US Senator McCain Welcomes Trump's New Strategy on Afghanistan
Trump explained the new US strategy would be secret and any timetables for ending the war in Afghanistan will be removed. He also said that he will not talk publicly about troop numbers in Afghanistan or plans for ongoing activities there.

At present, the United States has 8,400 troops deployed in Afghanistan in addition to the 5,000 NATO forces present in the country.

The United States and its allies launched a military operation in Afghanistan in 2001 following the September 11, 2001 terror attacks and the military mission in the country ended in 2014.