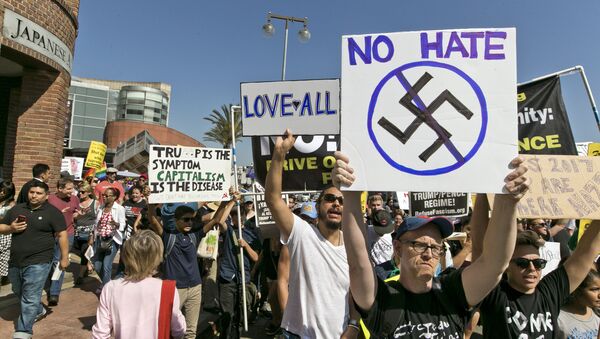 A regular meeting of the Charlottesville Council was suspended for a while as protesters took over the meeting blaming local authorities for their failure to prevent violent clashes that took place earlier in August, local media reported on Tuesday.

MOSCOW (Sputnik) – On August 12, white nationalists held a "Unite the Right" rally in Charlottesville, Virginia to protest authorities' plans to remove a monument of Confederate Gen. Robert E. Lee from a city park. The rally subsequently led to clashes with counter-protesters and culminated in a car-ramming attack that killed one person and injured 19 others.

Two activists carrying a poster, saying "Blood on your hands," jumped to the chamber’s dais, the NBC News broadcaster reported.

A mayor, vice mayor, as well as three council members, left the chamber, which was flooded by police officers who detained three people. They were reportedly later released.

The council resumed the meeting and unanimously voted for expediting the removal and relocation of the Robert E. Lee and Stonewall Jackson monuments. The council also decided to drape the statues "in recognition of the city's mourning," Charlottesville City Clerk Paige Rice said, as quoted by NBC News.

Violence in Charlottesville was condemned by US President Donald Trump.