Trump's 'Tragic Error is That He Focused on Foreign Affairs,' Not Home Agenda 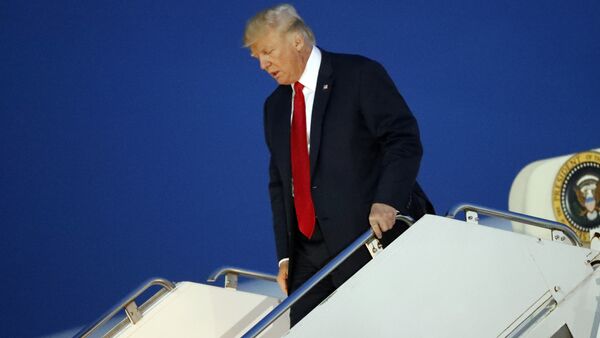 Commenting on a drop in President Trump’s favorability rating, Scott Bennett, a former US Army psychological operations officer and author, told Radio Sputnik that Trump needs to go back to his “America first” policy and abandon the many conflicts and wars that have not done America any good.

US President Donald Trump’s favorability rating has seen a significant drop in three states that supported his presidency in last year's election, according to three polls, conducted by NBC News/Marist.

Scott Bennett also said that the American people are largely suspicious of the mainstream media.

How Low Can He Go? Trump Plummets to New Depths in Polls
“It is looked at with a great deal of skepticism, because it’s been running stories about Russia’s meddling in the US presidential election, which hasn’t been proved, and is total nonsense. That being said, I think this poll was intentionally conducted after the events in Virginia to try to boost anti-Trump sentiment,” he noted.

The polls show that over half of the voters in Michigan, Pennsylvania and Wisconsin have lost confidence in Trump as the country's leader. At the same time, less than 30 percent of voters in each state said they were proud of him.

The majority of voters also stated they preferred a Congress with a Democrat majority rather than one controlled by the Republicans.

Bennett added that Michigan, Pennsylvania and Wisconsin were swing states that could vote either way during the 2016 election and that people in those states voted for Trump because they thought Hillary Clinton was “a lunatic” who would pull America into war, and a proponent of socialist and Big Government ideas they had had enough of.

“They voted for Trump also because he presented himself as an anti-establishment, anti-government person who would come and do the business of the American people, not continue down the typical government way,” Bennett noted.

He said that the American people were used to smooth-talking politicians while Trump is bombastic, his tweets are full of acrimony and this is why many people don’t like him.

“I think that [these poll results] are temporary and things are going to change.”

When asked how this diminished public support could affect Donald Trump’s image, Scott Bennett said that there are hardcore camps both on the right and left, but the elections are determined by the people in the middle who choose their candidate just two weeks before the election.

“I think that Trump needs to get back to his domestic agenda of building up the American state and business, to work on internal American life and culture, rather than the foreign policy  issues he has been drawn into. Trump needs to be a president of confidence and peace, not fear and conflict,” Bennett emphasized.

“His tragic error is that he has focused on the foreign relations area, but the Americans did not elect him for that. They voted for him to stop the war, to stop the regime change, the coup d’états, which is what Barack Obama did in Ukraine and Libya. The people who want war between Russia and the US, with Iran, etc., are Democrats, neo-Conservatives and the media.”

Trump Slams CNN, ABC, NBC for Publishing Negative Polls About His Policies
“What they tried to do is say that every white person in the South who does not want their statues torn down is a white supremacist, a racist, a tattooed Nazi ignoramus. That’s not what they are; they are protesting the removal of their history,” Bennett argued.

“The mainstream media is trying to show that these ‘racists’ and ‘supremacists’ are the problem in American society and all of them happen to be Trump voters.”

He added that Trump now needs to go back to his “America first” policy and abandon the many conflicts and wars that have not done us any good.

“He must also do an investigation into the ‘Deep State’ by his Inspector Generals to prosecute leakers and investigate the internal operations of agencies; he must tell the people to tell their congressmen and senators that they do not want war with Russia, that they want to be friends with Russia. He needs to appeal to the American people, do a lot more campaigning and let people lift him up and support him,” Scott Bennett said.

Scott Bennett added that Trump needs to relieve the people from the burden of government and free up more economic resources to raise their families.

“He also needs to restrain the military and say that we are not going to invade anyone, he needs to be much more isolationist because this is what the American people want. They voted for him because he promised them that he would stop the Syrian disintegration, stop the conflict, stop this Ukrainian madness where the CIA and the State Department created a coup and stop blaming Russia as if it captured Crimea.”

“Trump was elected to stop all that and shift directions and if he does this people will continue to support him,” Scott Bennett concluded.

The majority of voters also stated that they preferred a Congress with a Democrat majority rather than one controlled by the Republicans. The survey conducted last week comes in the wake of a car ramming attack in Charlottesville,  Virginia, where a woman had died and several people were injured.

The Charlottesville attack occurred as a far-right rally in the city turned into clashes with white supremacy opponents. President Trump faced criticism for insufficiently responding to the incident.