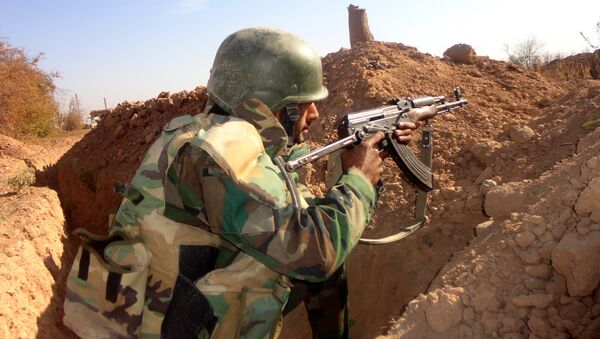 © AFP 2021 / Ayham al-Mohammad
Subscribe
The Russian Defense Ministry said that the Syrian government forces are advancing on the besieged city of Deir ez-Zor from three directions.

"Currently, the Syrian government forces are rapidly unfolding an offensive on Deir ez-Zor from three directions with the support of the Russian Aerospace Forces," Col. Gen. Sergei Rudskoy, the chief of the Russian General Staff's Main Operational Directorate, said.

"The foothold around this city [Deir ez-Zor] is the last major stronghold of the terrorists on Syrian soil. The remaining [terrorist] forces have been transferred there. According to our information, militants from Mosul and a large part of the most combat-capable Daesh units have been deployed to this area from Raqqa, which are the units of the so-called Syrian Democratic Forces supported by the US and its allies that could not be brought under control for three months," Rudskoy said.

The Russian Aerospace Forces have boosted their operations in the region to help the Syrian army' anti-terrorist campaign.

According to the Russian general, the liberation of Deir ez-Zor area besieged by Daesh terrorists would result in the terrorist group's main forces' defeat.

"With Deir-ez-Zor's deblocking, the main forces of the most odious terrorist groups [Daesh], which aims to create the so-called 'caliphate', would be defeated."

Russian Warplanes Helping Syrian Army Encircle Major Daesh Hotbed in Hama
As part of the operation, the Syrian army gained control over strategically important As Sukhnah settlement, the Russian military said. "A group of Syrian government troops, operating east of Palmyra, took over the  strategically important As Sukhnah settlement and is carrying out its offensive toward Deir ez-Zor."

"In order to destroy the surrounded terrorists who are trying to flee toward Deir ez-Zor, the intensity of the use of the Russian aviation has been increased to 60-70 sorties a day," Rudskoy said.

Earlier in the day, the Russian Aerospace Forces destroyed a large Daesh terrorist group convoy that had been heading towards Syrian Deir ez-Zor.

WATCH What Daesh Terrorists Left in Terror Hotbed Liberated by Syrian Army
Recently, the Syrian government troops liberated the town of As-Sukhnah in the Syrian province of Homs, which was considered to be the "key to Deir ez-Zor" currently besieged by the terrorist group.

Russian Defense Minister Sergei Shoigu said earlier that the Deir ez-Zor liberation would largely mean the successful end of the fight against Daesh.

000000
Popular comments
There should,nt be any prisoners. But if there are,They should be used as slaves to rebuild Syria, With US,EU, funding.
stevenrobertchurchill
21 August 2017, 16:43 GMT
000000
Let's increase the intensity and payload of the sorties and make them feel the baptism of fire🔥