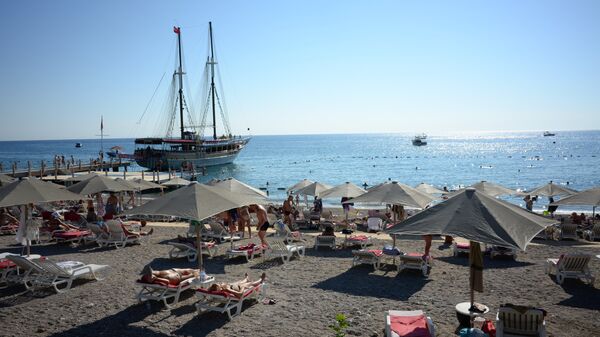 © Sputnik / Vladimir Vyatkin
/
Go to the mediabank
Subscribe
International
India
Africa
Russian nationals were on board a bus involved in an accident in Turkey’s Antalya, the Russian consulate told Sputnik on Monday.

"Out of 26 passengers, 11 were Russian nationals. They were all shocked and got bruises and injuries. According to the latest information, all of them apart from one received outpatient care, one person was injured more seriously and was hospitalized. He is expected to be discharged today," the diplomat on duty said.Russian nationals were on board the coach which was involved in an accident in Turkey’s Antalya, the Russian consulate told Sputnik on Monday adding that it was checking whether they were hurt.

Consulate General in Antalya Checking Info on Bus Accident With Russian Tourists
Earlier in the day, local media reported that a bus carrying foreign tourists overturned en route to the city of Belek due to heavy rainfall.
Newsfeed
0
Access to the chat has been blocked for violating the rules . You will be able to participate again through:∞. If you do not agree with the blocking, please use the feedback form
The discussion is closed. You can participate in the discussion within 24 hours after the publication of the article.
To participate in the discussion
log in or register
loader
Chats
Заголовок открываемого материала