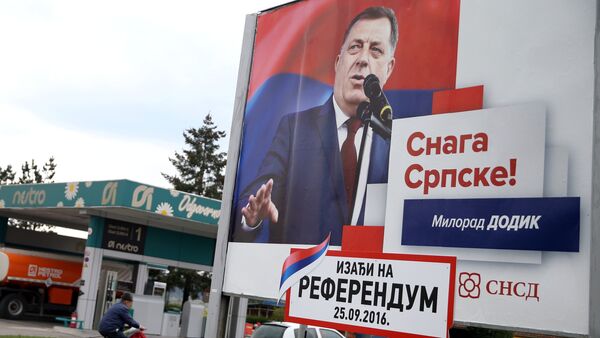 Dodik pointed out that a referendum would give the people an opportunity to voice their opinions on the possible integration of Bosnia and Herzegovina into the alliance when the issue is on the agenda.

"Several years ago we were not against some aspects of military cooperation with the alliance. But now the situation is different. NATO wants Bosnia and Herzegovina to join the military bloc without the consent of Republika Srpska. This is why the people’s voice is what really matters," Dodik told Sputnik Serbian.

Serbian-majority Republika Srpska is one of two largely autonomous entities constituting Bosnia and Herzegovina. The other one is the Federation of Bosnia and Herzegovina dominated by Bosniaks and Croats – as well as the Brcko district. The union state is governed by a three-member presidency.

NATO's Balkan Dream: 'Gaining Access to Key Strategic Facilities'
Commenting on the possible date for such a vote, the president suggested that it should be organized "as soon as possible."

"There is some sort of a consensus within Republika Srpska that we should not advance towards a membership in NATO. The most adequate response is to organize a legitimate referendum as soon as possible. If RS says no to Bosnia and Herzegovina’s admission to NATO this would mean no more procedures related to joining the alliance," Dodik said.

He explained that the decision has been prompted by a recent ruling of the Constitutional Court of Bosnia and Herzegovina that the Veliki Zep military facility in Republika Srpska is owned by the state.

Re-registration of the so-called "prospective military property" is the final step in Bosnia and Herzegovina’s bid to join NATO, the so-called Membership Action Plan.

"This decision is aimed at stripping Republika Srpska of the right to possess its own property. This decision was imposed by NATO and supported by Sarajevo. The alliance shows its defiance of law and sovereignty. … Republika Srpska will not obey this ruling. This precedent is very dangerous," Dodik said.

Top US Think Tank Says NATO Must Swallow Up Georgia, Macedonia, Bosnia & Ukraine
Commenting further, the president shed light on the possible plan for a referendum.

"We’ll try to unite all of the RS political parties and reach a consensus on a referendum. The proposed question should be: 'Do you support Republika Srpska becoming a NATO member?'" Dodik said.

He also commented on the possible consequences of a referendum and the possible reaction from the international community.

"I guess they will say that the referendum is illegal. But it is legal for Republika Srpska. We want to reach a domestic political consensus and abandon the integration with NATO. We want to send a clear message that Bosnia and Herzegovina should not join NATO in a polarized world, in which joining one side would mean losing Russia and other friends. We don’t want to lose this friendship. Republika Srpska wants to be like Serbia that maintains neutrality. At the same time, we should not forget about NATO’s attempts to meddle in our domestic affairs," Dodik said.

Balkans Risk 'Losing Neutral Status' as More Nations May Soon Join NATO
Sarajevo and Brussels have been discussing Bosnia’s NATO membership since the mid-2000s. Bosnia and Herzegovina joined NATO’s Partnership for Peace program in 2006. As part of the reforms needed for the implementation of the program, Republika Srpska’s armed forces and defense ministry were abolished and control over the RS Army was transferred to a state-level ministry.

Bosnia and Herzegovina was expected to join NATO by 2011, but the plan hit a skid over the need to hand over more than 60 military facilities to the federal government.