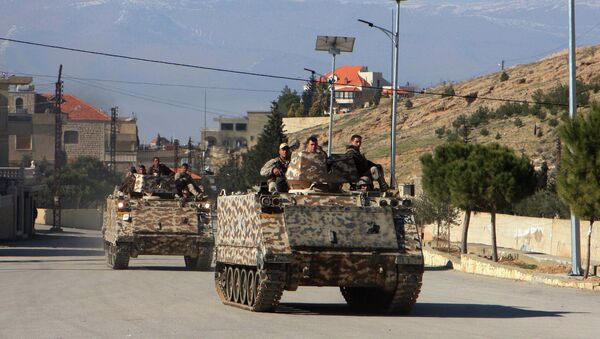 © AFP 2023 / STR
Subscribe
International
India
Africa
The Lebanese Army has launched the ‘Fajr al-Joroud’ (Dawn of the Outskirts) offensive to drive Daesh militants out of the Lebanese-Syrian border region.

According to the general, the main purpose of the offensive is to return all Lebanese lands under the control of the government right up to the borders with Syria.

It was especially noted that coordination between the Hezbollah movement and the Syrian Army is not envisaged, and there are also no plans to conduct any negotiations with Daesh militants.

The army leadership also expressed hope to liberate captured soldiers of the Lebanese Army as soon as possible.

According to the general, in Lebanon there are about 600 militants, which are divided into three groups with some located in the north of the Raas al Baalbek and al Qaa mountains. These terrorists are armed with anti-aircraft weapons, sniper rifles and they often move from place to place on motorcycles.

Daesh militants hide in the caves and crevices of the mountains, so the Lebanese Army must battle its enemy great skill and maneuvering.

A deputy of the Lebanese Parliament, a member of the "Islah wa tagiir" block, Amal Abu Zeid, told Sputnik that this operation is noteworthy for several reasons.

“Firstly, this political decision was made in the presence of the Lebanese President and the head of the Supreme Defense Council, without objections from the government, and secondly, this is exclusively a Lebanese solution without any outside influence,” Zeid said.

He further added that keeping in mind these factors it is clear that this operation is carried out exclusively in the interests of the Lebanese people.

Lebanon announced the start of the offensive against the Daesh enclave on the northeast part of its border with Syria on Saturday. Damascus and the Lebanese militia movement Hezbollah are also currently carrying out their anti-Daesh offensive on the Syrian side of the border.

The Lebanese Army eliminated 12 Daesh strongholds on the Lebanese-Syrian border during the second day of its anti-Daesh offensive, according to a statement of the army’s command obtained by Sputnik on Sunday.