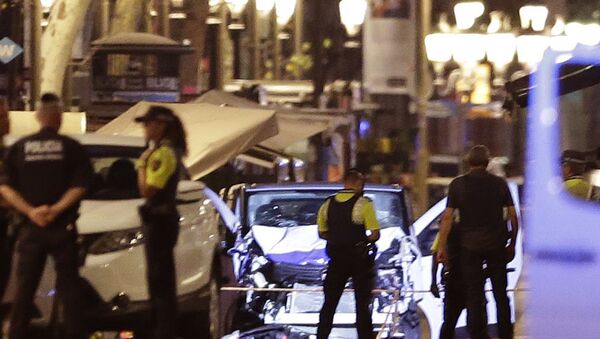 There are indications that the imam of the Spanish city of Ripoll, the suspected mastermind of the attacks in Barcelona and Cambrils, died in an explosion in Alcanar just a day before, local media reported Monday.

MOSCOW (Sputnik) – According to El Periodico daily citing Josep Lluis Trapero, chief of Catalonia’s police force (Mossos d'Esquadra), the remains of Abdelbaki es-Sati were found in the debris of the Alcanar blast.

On Saturday, the country's authorities raided the house of es-Sati in Ripoll.

"In Alcanar, we have found the remains of two people. Everything indicates that the imam of Ripoli was among the deceased in the house," Josep Lluis Trapero, chief of Catalonia’s police force (Mossos d'Esquadra), said Monday said, as quoted by the El Pais newspaper.

Abdelbaki es-Sati was reportedly detained several times before by police. But he was not previously charged with any offenses, related to terrorism, the official added.

Es Satty, in particular, was detained in 2010 in Ceuta, a Spanish enclave on the north coast of Africa, for attempting to smuggle 12 kilograms (26 pounds) of hashish, the El Pais newspaper reported.

The terrorist cell, which included 12 people, prepared explosives in a house in Alcanar town 120 miles south of Barcelona, using gas canisters and explosive material known as the "Mother of Satan," El Confidencial online media outlet reported on Saturday. But the gas cylinders accidentally detonated, destroying the house and killing two people the night before the attacks in Barcelona and Cambrils, which made the perpetrators change their plan for the attack. The media outlet also pointed out that the terrorists initially saw the Sagrada Familia cathedral as their only target.

Meanwhile, El Espanol online media outlet reported that, apart from the cathedral, terrorists had also planned attacks on Las Ramblas street and in the port area of Barcelona.