After MOAB Strike, US May Provoke New 'Source of Global Tension' in Afghanistan 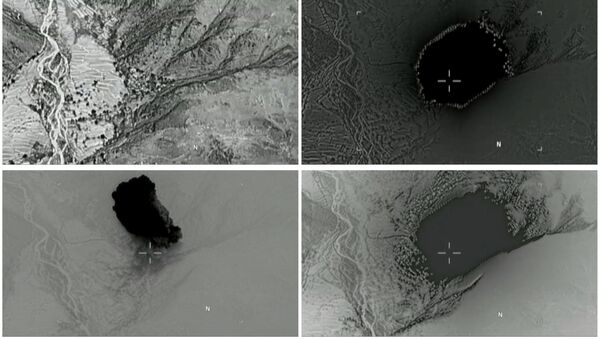 © REUTERS / US Department of Defense
Subscribe
International
India
Africa
For several months now, the US has been unable to decide on a new strategy for Afghanistan. Meanwhile, the situation in the country is getting worse. Political analyst, Abdul Kader Mesbah told Sputnik Dari in an interview that no one will pay attention to the situation in Afghanistan until terrorists begin to threaten the US or the world community.

“The US does not pay any attention to how critical the situation in Afghanistan is, and terrorism in our country is growing every day. For several months now, the US cannot decide on a new strategy for Afghanistan. All this time, the situation in the country is getting worse. The militants have seized even more provinces and the situation of the central government and foreign forces has deteriorated,” Mesbah said.

He further said that the same can be said about the situation in the internal politics of the state.

“The deputies of the president do not obey the president himself. Nobody needs executive power. Therefore, the authorities cannot take decisive measures to eliminate the crisis,” Mesbah said.

Asia
Taliban Calls on Trump to Withdraw US Troops From Afghanistan
According to him the situation is now dire for the government of Afghanistan, and foreign forces, and to top it all there is another crisis brewing — water.

“Neighboring countries encroach on our water resources. People are outraged by the growth of drug smuggling and lack of a normal economy. By dropping the "mother of all bombs" [MOAB] in Achin to destroy Daesh militants the US spent millions of dollars, but the region did not get rid of them,” Mesbah said.

He further said that the mountainous terrain in Afghanistan is perfect for sheltering the terrorists.

“All US statements that they will destroy terrorists are nothing more than slogans. The US lost the war in Afghanistan, and Obama and Trump are to blame. This has been said by McCain and other senators. The senators warn that if Afghanistan is neglected, the situation will become ten times worse than in Iraq,” the analyst said.

Member of the Afghan parliament, Haji Mohammad Abdo, also expressed doubts about US successes in the country and noted that if it does not adopt a new strategy soon, Afghanistan could turn into a second Iraq.

Asia
US' $8.5 Billion Campaign to Fight Drugs in Afghanistan a 'Failure', Moscow Says
He further said that the people of Afghanistan truly hoped that the US and NATO would bring peace to their country, but it has not happened.

“The war has intensified. Our people are tired of fighting and do not want to sacrifice themselves any more. They also do not want the country to be a source of terrorism for any other country,” the parliamentarian said.

He further said that the new US president has been in the White House for six months, but still he has not defined a strategy for Afghanistan.

“The US senators say that if this continues, then America will receive what is happening in Iraq – only 10 times worse. Today's Afghanistan is a source of world tension,” Abdo concluded.