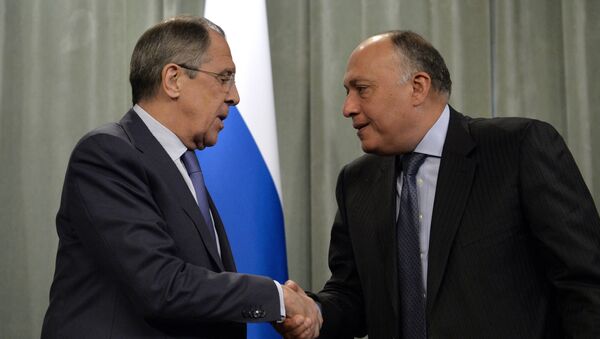 Russian Foreign Minister Sergey Lavrov will hold talks with his Egyptian counterpart Sameh Shoukry on Monday as part of the latter's official state visit to Moscow scheduled for August 20-21.

MOSCOW (Sputnik) — During the negotiations, the parties will continue the exchange of opinions on international and regional agenda issues, according to Russian Foreign Ministry spokeswoman Maria Zakharova.

The meeting would also be focused on further strengthening Russian-Egyptian ties, as well as issues of Middle Eastern and North African conflicts, including those in Syria, Libya and Yemen.

Zakharova noted that the talks would also be devoted to issues of countering terrorism and extremism. The ministers will dwell upon ways of reducing the potential for conflicts, as well as prospects of creating a zone free of weapons of mass destruction in the Middle East.

Egypt’s Foreign Ministry said that during his visit to Russia Shoukry plans to discuss Cairo-Moscow bilateral relations and cooperation on a number of regional and international issues, including the fight against terrorism.

Russia Still Believes Egypt Unsafe for Tourists
Russian media reported on Wednesday, citing the Egyptian embassy in Russia, that one of the key issues of the bilateral talks between Lavrov and Shoukry would be the security of air travel between Russia and Egypt. Air traffic between the two states was suspended in 2015 after a deadly Russian passenger flight crash over Sinai.

As part of his visit to Moscow, Shoukry will also pass on a message to Russian President Vladimir Putin from Egyptian leader Abdel Fattah Sisi reiterating Cairo's interest in strengthening and developing bilateral relations with Russia and coordination between the two countries on the international arena.

Shoukry is also planning to meet with Russian Industry and Trade Minister Denis Manturov to discuss Russia's investments in the Egyptian oil and gas sector, as well as in the free economic area set to be established in the Suez Canal Development Zone.

The last meeting between Lavrov and Shoukry took place in Cairo in May.