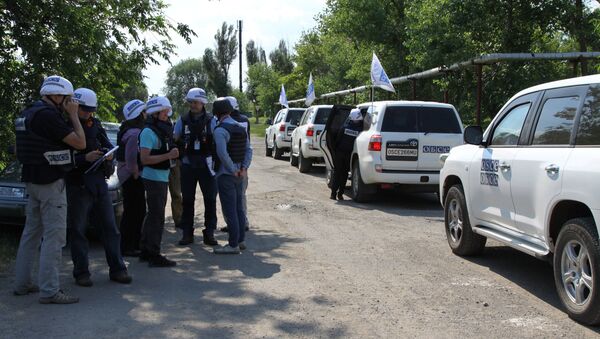 Ukrainian security forces attempted to capture the positions of the forces of the self-proclaimed Donetsk People's Republic (DPR) in the outskirts of Donetsk, Eduard Basurin, deputy commander of DPR Operational Command, said on Sunday.

DONETSK (Sputnik) — Basurin added that the attempted attacks on DPR positions were accompanied by shelling of Donetsk outskirts. He also recommended for the command of Kiev forces to comply with the Minsk agreements.

"Ahead of the Independence Day of Ukraine, subdivisions of the 57th separate mechanized infantry brigade … attempted to capture our positions in the area of Zhabunki. However, upon having received a commensurate and appropriate response, the enemy fled in disgrace," Basurin told reporters.

Donbass: Ukrainian Sniper Opens Fire at Construction Workers Near Horlivka
The military conflict in Ukraine erupted in 2014 after the self-proclaimed east Ukrainian republics refused to recognize the new Ukrainian government that came to power in what they perceived to be a coup. The ceasefire agreement was reached in Minsk in 2015, brokered by the leaders of the Normandy Four group, but the situation has remained tense.