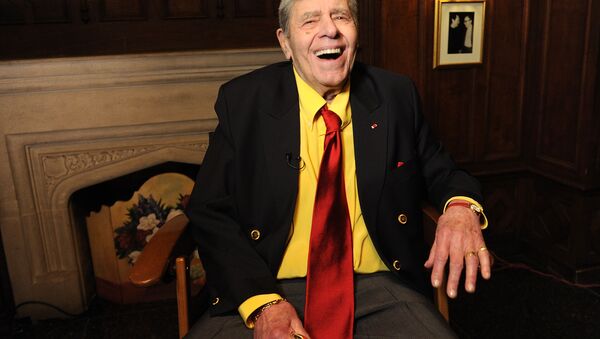 Born in 1926 in Newark, New Jersey, Lewis first rose to fame in his 20s, shortly after World War II, with his nightclub act opposite crooner Dean Martin, who played the unflappable straight man to Lewis's antics. Their meteoric rise hinged on their chemistry as performers — ‘sex and slapstick,' Lewis would call it: Martin's unstoppable cool, Lewis's uncontainable comedy.

The two starred in more than a dozen movies together before their split in 1956. Lewis would go on to appear in dozens more as a solo star, including his biggest hit, 1963's "The Nutty Professor." He was also a writer and director.

From 1966 to 2010, Lewis hosted the annual Labor Day Muscular Dystrophy Telethon, an event that could run up to 21 hours and featured interviews by Lewis, skits and musical performances. A Los Angeles Times article from 2011, the year after Lewis last hosted the event, reported that Lewis's telethons had helped raise more than $2.5 billion for research into the disease.

Lewis was given the French Legion of Honor award in 1984 — the comedian was appreciated in France long after his slapstick appeal had faded in the US. He never won an Oscar performances, though he was widely beloved, but was awarded the Jean Hersholt Humanitarian Award by the US Academy of Motion Picture Arts and Sciences in 2009, and was made an honorary member of the Order of Australia for his charitable work in 2013.

He would attribute his incredible stardom to his childlike attitude toward the world. "I made a career out of it. It's a wonderful place to be," he explained, according to the BBC. "I've had great success being a total idiot."

Lewis leaves behind a wife, six sons and one daughter.