Pressure From Iran, Turkey 'May Become an Obstacle' to Kurdistan Independence 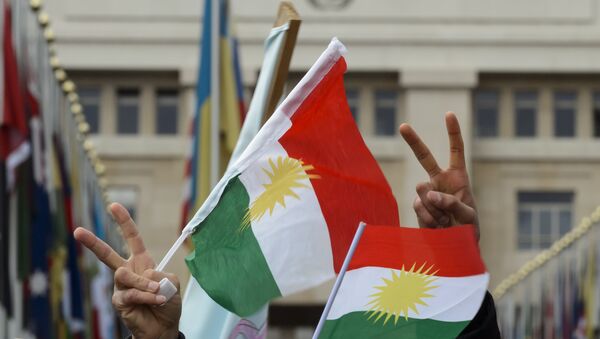 The controversy surrounding the September 25 referendum on the independence of Iraqi Kurdistan is gaining momentum. Iraqi Prime Minister Haydar El-Abadi warned that the potential creation of an independent Kurdish state could lead to tragic consequences, while Turkish Foreign Minister Mevlut Cavusoglu pointed to the threat of a civil war.

In an interview with Sputnik Turkey, political analyst Celal Baslangıc commented on the situation around the referendum and its possible consequences. In his opinion, if the referendum takes place, the population of Iraqi Kurdistan may face a serious economic crisis.

"Many political movements in Iraqi Kurdistan are afraid of pressure from Turkey, Iran and the central Iraqi authorities. The fact is that the Regional Administration of Iraqi Kurdistan largely depends on maintaining relations with Turkey and Iran. Erbil receives electricity from Turkey, and Sulaymaniyah — from Iran," Baslangıc said.

Ankara Calls on Iraqi Kurdistan to Give Up Referendum Initiative
"Moreover, all food is imported from Turkey and Iran. Many believe that the economic situation, as well as relations with the central Iraqi government and neighboring states, can become a significant obstacle to the actual proclamation of an independent Kurdish state," he continued.

The expert also stressed that no third parties have a right to interfere in the referendum process.

"We need to show respect for the right of the people to determine their own future. In this process, neither the US nor Turkey should interfere. Ultimately, the decision will be made by the Kurdish people. If the Kurds consider it necessary, they may consult and negotiate with the central government, if they do not want it — they are not obliged to do so. Kurds are currently discussing the upcoming referendum process, its possible consequences for various parties. But no foreign state has the right to insist on holding or not holding this referendum," Baslangıc said.

Iraqi Delegate Praises Russia's Position on Kurdistan's Independence Referendum
The Kurds, who make up about 20 percent of the Iraqi population, have been seeking self-governance for decades. In 2005, Iraq's Constitution recognized Kurdistan as an autonomous region, run by the Kurdistan Regional Government.

In June, Masoud Barzani, the president of Iraqi Kurdistan, set September 25 as the date for an independence referendum. The move provoked harsh criticism from Baghdad claiming that the referendum would violate the country's constitution.