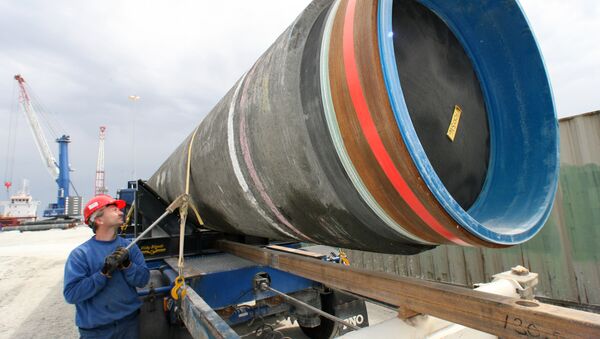 Russian Energy Minister Alexander Novak said that the Nord Stream-2 and Turkish Stream gas pipeline projects would be implemented on time, regardless of the new US law that expands sanctions against Moscow. Political analyst Alex Zubets told Radio Sputnik that Brussels is well aware of its own interests and is likely to back the project.

Alexei Zubets, deputy-rector of the Financial University with the Russian government, believes that in the field of energy the EU is more likely to back up Russia rather than side with the US.

"I believe that both the Turkish Stream and Nord Stream-2 will be implemented because they coincide with the interests of our counterparts: Western Europe, represented by Germany, and Turkey. This ensures a much higher level of freedom for Russia in terms of its energy exports to Europe as Trump openly said that he views Europe as a ‘fodder base' for US companies," the expert noted.

According to Zubets, Russia is important as a counterweight in the EU's fight against American expansionism, which threatens European interests.

"European elites are well aware of their own interests, which is why they are more likely to ally with Russia than the United States," Zubets said. "The Europeans will support Russia not because they love us very much, but because it is unacceptable for them to be America's servants, because it is a loss of big money and economic interests," he added.

By 'Trying to Kill Nord Stream 2', US Risks Having 'Serious Tensions' With EU
Gazprom and its European partners are currently working on two pipeline projects, Nord Stream 2 and Turkish Stream. The pipes have been paid for and most of the preparatory work has been done, but the pipelines are yet to be laid.